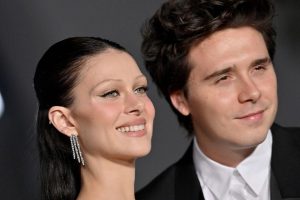 Nicola Peltz-Beckham was certainly filled with 90s glamour as she sported stunningly thin eyebrows at the Academy Museum Gala over the weekend.

The actress, 27, attended the event with her husband Brooklyn, 23, who was dressed in a classic black blazer jacket and trousers. He then wore a white shirt underneath with his hair in an updo style.

Nicola's stylish thin eyebrows suited her look for the night, which had light makeup and a black wing eyeliner.

She also wore her hair in a slick ponytail, while dangling silver earrings hung from her ears.

The star rocked a sleeveless black dress with long black gloves that had her sparkling ring on top.

Sharing the snaps on her Instagram page, many fans couldn't help but comment about how stunning Nicola looked.

One person said: "@Nicolaannepeltzbeckham you look stunning and smile more, you look beautiful when you smile."

A second wrote: "You look beautiful. Keep the dark hair, you look so stunning with it Nicola."

"Nicola, your smile is shining so bright in these photos. Beautiful," another added.

And a fourth user commented: "You're an icon of beauty and class @Nicolaannepeltzbeckham."

Nicola and Brooklyn tied the knot in April earlier this year.

While Nicola has been at the centre of rumours about an alleged rift between her and her mother-in-law Victoria Beckham, the family looked on good terms earlier this month at Victoria's Paris Fashion week debut.

Sharing many snaps of her husband, children and daughter-in-law, Victoria declared that she loved her family.

Nicola previously shut down reports that a feud began when she didn't want to wear a wedding dress designed by Victoria.

She told GRAZIA USA: "Well, I was planning on wearing Victoria's wedding dress.

"I was truly so excited to be able to wear a design that my future mother-in-law created. I thought that was so beautiful and such a beautiful story."

However Victoria's atelier was later unable to make the gown.

Nicola added: "When I read things that say [things like] I was never planning on wearing a [Victoria Beckham] dress or things like that, it does hurt my feelings.