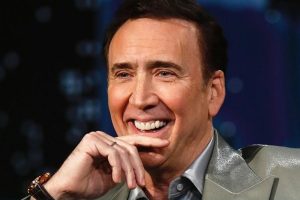 The ‘Unbearable Weight of Massive Talent’ actor explains in a new interview that he has come to an age where he finds drugs scary after a mushroom trip turned sour.

AceShowbiz –Nicolas Cage admits he’s “frightened” to take drugs as he gets older. The 58-year-old actor says, while he hired family friend Tony Dingman to be his “drinking coach” for 1995 movie “Leaving Las Vegas“, he didn’t use a similar tactic for scenes in “The Unbearable Weight of Massive Talent” in which Cage’s character – a fictionalised version of himself – takes LSD.

“No, at my age I’m pretty frightened to take a trip. I’ve never done anything like that. I once did something with mushrooms that didn’t work out so well for me, so that scares me,” he laughed when asked by Empire magazine if he had a coach for those scenes.

Playing himself on screen was a scary prospect, but Nicolas was keen to portray his younger self from an infamous appearance on the “Wogan” show in 1990, which saw him bare his chest to host Terry Wogan.

He added, “I can tell you I was really terrified of the whole thing. Of course, because I was so afraid of it, my instinct was to move toward it. I did want to play [youthful alter ego] Nicky. I thought it would be a fun experiment to go back and try to play that guy that was on the ‘Wogan’ show acting like a complete a**.”

Despite taking on a satirical version of himself for the movie, Nicolas has insisted he doesn’t enjoy watching his own films back. He explained, “I try not to. Once I’m done with something I try to move on. I don’t want to get stuck in a rut. I want to think about what’s next.”

Meanwhile, the Hollywood star admitted last year that he was glad to have left the “obnoxious” persona from the “Wogan” appearance behind in real life. He said, “That was Nic in 1990 and I’m so glad I’m nothing like that person anymore. But I was happy to bring him back. Actually, I have really quiet moments at home, reading with my cat.”