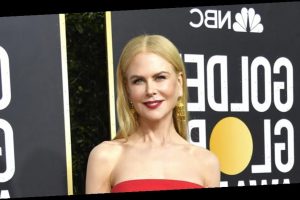 Nicole Kidman is opening up about playing Lucille Ball in the upcoming film Being the Ricardos after her casting caused public outcry on social media.

In a new interview with Variety, the Australian actress shared how she’s been preparing for her role as Lucille and her enthusiasm for the movie.

“I love Lucille, having looked now and delved into her,” Nicole shared. “She’s an amazing woman. I’m very excited for people to see what [director Aaron Sorkin] found out about her and the way he’s interpreted Desi and Lucy and the way that it’s so rich. I didn’t know any of this.”

Javier Bardem will star opposite Nicole as Lucille‘s husband Desi Arnaz, who she was married to from 1940 to 1960. The movie is set to be released on Amazon.

The Undoing star voiced her excitement to be working alongside Javier and Aaron Sorkin: “With Aaron’s words and his direction and Javier … that’s kind of a wonderful prospect to, you know. But yikes, off we go. Give it a go. Try my best—see if I can do it.”

Nicole‘s casting was met with skepticism online but Lucie Arnaz, the 69-year-old daughter of Lucille and Desi, expressed her support for the actress in a Facebook video.

Debra Messing also reacted to news of the biopic was announced and campaigned for the part on Twitter.