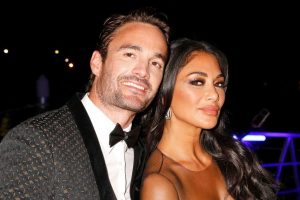 Pop star Nicole Scherzinger is said to be “set to marry” her beau Thom Evans after two years together.

Former Pussycat Dolls member Nicole, 44, and rugby star Thom, 37, are rumoured to be on the verge of announcing their engagement.

The Daily Mail reports that a pal has said the pair are engaged.

The publication claims a pal revealed: “They are getting married”.

OK! has contacted representatives for Nicole and Thom for comment.

It is rumoured Thom proposed on the couple’s recent holiday to Mykonos where they celebrated Nicole’s 44th birthday.

The couple arrived in Mykonos at the end of June to celebrate the star’s birthday, and they shared a video of the pair dancing from their accommodation.

Over an upbeat backing track, Nicole can be seen in a dressing gown where she swipes a towel across the screen as part of a special effect that sees her rapidly change into a long, white evening gown.

Boyfriend Thom then steps out from behind her as the pair begin to dance, with Nicole shimmying for the camera and Thom stepping from side to side.

The couple look dressed up to go somewhere fancy, with Thom wearing a smart suit and Nicole looking stunning in a long dress with tassels and a pair of pearl earrings.

Captioning the video, Nicole wrote: “Droppin’ into my birthday celebrations today like…”

The loved up pairconfirmed their relationship in 2020and have been going from strength to strength since.

While on the Spanish island Nicole posed for poolside selfies in a cutaway bikini while flaunting her toned abs for the camera.

She proved she didn’t need glam to be beautiful as she showed off her no makeup look while pouting in the lens.

Nicole and Thom have been enjoying jetting off around the world in recent months andpreviously were in Mexico.

As their relationship goes from strength to strengthThom’s pal Ben Foden predicted that the sportsman would propose to Nicole.

Speaking to OK! earlier this year he said: “They seemed very happy when I saw them.

“I don’t think they are putting a time limit on it, they’re just getting to know each other. They’re very new to it. If they are going to take any advice for Jackie and I, it would be to go for it!”

He said: "I am [in touch with them.] Max Evans, Thom’s brother, did Dancing on Ice so I’ve spoken to him about it. I saw Thom just before we flew over to do this, during Halloween, I saw him and Nicole and two of their friends.

"We had a few nights out. Me and Thom have been in and out of each other’s lives since we were 18, so it’s always fun catching up with him and making sure when the stag do is happening I can get an invite!"