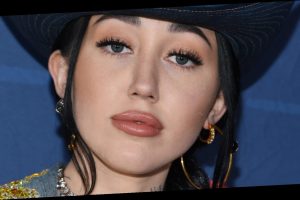 While her sister, Miley, is no stranger to the award show, Noah Cyrus made her Grammy debut on Sunday. The “July” singer was nominated for Best New Artist, along with Ingrid Andress, Phoebe Bridgers, Chika, D Smoke, Doja Cat, Kaytranada, and Megan Thee Stallion (via Pop Culture). Before the ceremony, Noah’s father — Billy Ray Cyrus — sat down with his daughter to offer up some advice on an episode of “Music’s Biggest Night: The Best New Artists” from Spotify’s For the Record podcast (via People).

Billy Ray was nominated for the same award in 1993, so he knows a thing or two about getting ready for “music’s biggest night.” He told his daughter to “be original” and “not be afraid to be yourself.” It seems Noah really took that advice to heart when picking out her red carpet outfit. The singer wore a “Schiaparelli Spring 2021 Haute Couture” gown, according to Twitter, and it definitely had viewers talking.

Some users on Twitter thought the oversized white couture gown really resembled a comforter or tissue. As one user pointed out, it looked like Noah Cyrus rolled out of bed for the award show, but her bed said, “I’m going WITH you” (via Twitter). Due to the ongoing coronavirus pandemic, the ceremony this year went all-virtual, according to Yahoo!, so a bed-themed look is very on trend. As one Twitter user pointed out, Noah’s look was “smart and COVID friendly” (via Twitter).

While the gown did cause some viewers to do a double take, others found the red carpet outfit to be the ultimate fashion statement. One Twitter user simply said, “Noah Cyrus in Schiaparelli… that’s it that’s the tweet” (via Twitter). Even Glee actor Kevin McHale sung Noah’s praises by saying, “we need to put some more respect on @noahcyrus. She’s so goddamn talented” (via Twitter). Whether you liked the look or not, there’s no denying that Noah Cyrus was totally original and made a big impact on her first Grammy night.