Novak Djokovic Hits Line Judge in the Face with Tennis Ball, Not Disqualified This Time! 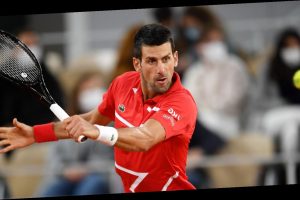 Novak Djokovic has done it again!

Just one month after the tennis star was disqualified from the U.S. Open after accidentally hitting a lineswoman with a tennis ball, he hit a line judge in the face during the French Open.

The moment happened during Novak‘s fourth round match against Karen Khachanov of Russia on day nine of the 2020 French Open on Monday (October 5) at Roland Garros in Paris, France.

The French Open moment was purely accidental and it happened while the ball was still in play, so he was able to continue in the tournament. The line judge thankfully was not injured.