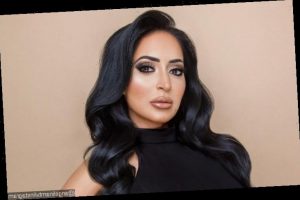 The MTV personality claimed that she experienced sexual harassment, including repeated and unwelcome sexual advances, when she was working as an EMT for the New York City Fire Department in Rossville.

AceShowbiz –Angelina Pivarnick has gotten the result she was looking for in her legal battle against the New York City Fire Department. Just over one year after she filed a lawsuit for sexual harassment she claimed to have experienced while working as an EMT, the “Jersey Shore” star was unveiled to have reached a settlement that will see her receiving $350.000 from the city.

Commenting on the settlement with the 34-year-old, New York City Law Department’s spokesperson Nicholas Paolucci said to the press, “The FDNY takes allegations of sexual harassment seriously. Ms. Pivarnick’s claim was fully investigated, and the appropriate corrective action was taken.” He added, “This settlement was in the best interests of the city.”

Angelina herself has given her statement over the outcome of her case to Entertainment Tonight. “I said when the case was filed that it had nothing to do with television or entertainment and that remains true,” she stated via her attorney. “Sexual harassment is serious and has devastating consequences for so many women. It has for #MeToo.”

“Although I experienced horrendous treatment at EMS, I’m pleased with the resolution of my case,” the reality star continued to share her thoughts on the matter. “and I look forward to using my voice to speak about the need to protect all women from sexual harassment.”

Angelina’s attorneys Kevin Mintzer and David Harrison have also weighed in on the settlement from the city. “Throughout this process, Angelina has been brave, dignified, and determined to see that justice was done. The settlement reflects the serious abuse that Angelina experienced while working for EMS,” they pointed out.

“The City should redouble its efforts to protect the women in its workforce from sexual harassment,” they went on noting. “Particularly those women who work in traditionally male dominated fields.”

Angelina slapped the NYFD with the lawsuit back in 2019. At the time, she claimed to be subjected to sexual harassment from two of her supervisors between 2017 and 2018 while working as an EMT at the Rossville Station in Staten Island. She named Lt. Jonathan Schechter and Lt. David Rudnitzky in her legal documents.

“The sexual harassment that Pivarnick experienced included repeated and unwelcome sexual advances,” part of her lawsuit read, “degrading comments about her body, vulgar sexual comments, inappropriate questions about her private relationships and, in one instance, the groping of an intimate part of her body without her consent.”

In her lawsuit, the wife of Chris Larangeira noted that she filed a complaint about Rudnitzky’s alleged sexual comments at her with the FDNY’s Equal Employment Opportunity Office. She, however, was met with retaliation for her allegations.

END_OF_DOCUMENT_TOKEN_TO_BE_REPLACED

END_OF_DOCUMENT_TOKEN_TO_BE_REPLACED
We and our partners use cookies on this site to improve our service, perform analytics, personalize advertising, measure advertising performance, and remember website preferences.Ok