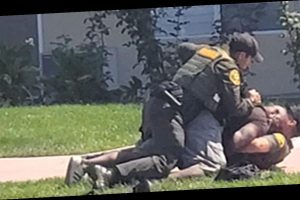 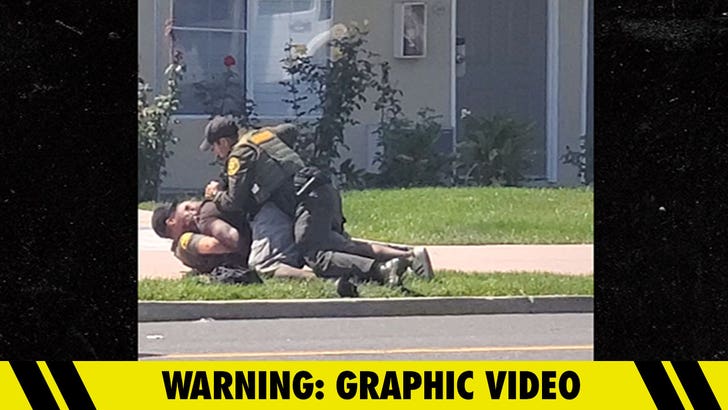 Two Orange County Sheriff’s Deputies got into a physical confrontation with a homeless man who allegedly went after one of the deputies’ guns. The homeless man was shot and killed, and it was all caught on video.

The incident went down Wednesday afternoon in San Clemente, in front of the Hotel Miramar. Cops were called after witnesses said they saw the homeless man walking in the middle of the street into oncoming traffic. Witnesses said cars honked and swerved to avoid hitting him.

According to the Orange County Sheriff’s Department, when deputies from the homeless outreach team arrived, they got into a tense, physical confrontation with the man. As you see in the video … the man appears to push the deputies. A physical encounter ensues and you can hear a deputy say, “He’s got my gun” — suddenly, 2 shots are fired.

The deputies performed CPR on the man, who died at the scene. The Sheriff’s Department says surveillance video clearly shows the man trying to grab a deputy’s gun.

The Dept. is investigating.

END_OF_DOCUMENT_TOKEN_TO_BE_REPLACED

END_OF_DOCUMENT_TOKEN_TO_BE_REPLACED
We and our partners use cookies on this site to improve our service, perform analytics, personalize advertising, measure advertising performance, and remember website preferences.Ok