Odell Beckham Jr. Seen Hurling Abuse at Passenger While Being Escorted Off Flight in Bodycam Footage 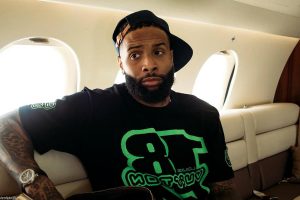 The 45-minute footage also shows flight attendants recalling how the NFL star was allegedly unresponsive when they repeatedly asked him to put his seatbelt on.

AceShowbiz -New police bodycam footage of Odell Beckham Jr.‘s interaction with cops, flight attendants and passengers while being escorted off a flight has revealed the plane drama in November last year. In the video, the NFL star was seen hurling abuse at one passenger, calling them “fat” and “ugly” after he’s ordered to deplane.

The 45-minute video begins with officers boarding American Airlines Flight 1228 and approaching the 30-year-old’s first-class seat. Other passengers can be seen eagerly watching as the scene unfolds and the police make contact with the athlete.

“Sir, are you able to get up? Can you get up please? Are you okay?” one officer asked. The NFL free agent appears confused before saying that he was “probably in a deep sleep” as cops explain why they have approached him.

Later, flight attendants are seen assuring the officer that Odell was intoxicated. “Do you know how many times we’ve shaken him to put the seatbelt on?” a female attendant tells the cops, “Multiple times, multiple people.” A male flight attendant adds, “This is a five-hour flight, he shouldn’t be doing this,” adding Odell told one attendant he had been out clubbing the night before. “He’s tired,” the cops simply replied.

However, the flight attendants and even the captain want Odell to be escorted off the plane, describing him as “belligerent and non-compliant.” As the decision to kick passengers off the plane is announced, Odell begins to confront passengers and apologize.

Despite so, one passenger tells him, “Just get off the plane.” A furious Odell responds with “f**k you.” The footballer then tells an officer, “I’ve never had this happen to me.” He’s offered to catch the next flight but refuses.

As the passengers are deboarding, one person urges Odell to “just get off the plane.” The athlete, leaning forward, responds, “There’s nothing you can ever say, ever. You’re everything wrong with the world. Looking at me to get off a plane, for you. I would never, ever in my life, get off the plane for you, specifically you. Maybe everybody else, I would get off the plane. That s**t don’t mean nothing to me. You gon’ wait 40 minutes and I’m going to be on a private plane home. Yeah, with your fat a**.”

“Get your a** off the plane for a second. Enjoy the cheese board on the way home with your ugly a**,” the wide receiver continues. He then directs a message to the rest of the passengers, “Got life f**ked up, I’m sorry. All you had to do was wake me up. B***h, now you made it my point to not get off the f**king plane. You couldn’t even make this s**t up.”

Back in November, it’s reported that Odell was removed from a flight at Miami International Airport after police say he was “in and out of consciousness” and refused to leave the airplane when asked. According to a statement from the Miami-Dade Police Department, officers were called to the plane for a medical emergency after the flight crew expressed concern that he was seriously ill.

Later on, Odell appeared to address the incident in a series of Twitter posts. He first wrote, “Never in my life have I experienced what just happened to me… I’ve seen it alll…” He then stressed in a separate post, “Never. In. My. Life.”

Then Odell’s lawyer released a statement regarding the plane incident. “Earlier today, Odell Beckham Jr. boarded a morning flight in Miami without any problems. The flight was delayed after boarding and prior to take off, Mr Beckham fell asleep with his blanket over his head, which is his normal practice for long flights,” Daniel Davilier explained.

Daniel further stated that Odell “was awakened and told that the plane was back at the gate and that he needed to get off the plane because he did not put his seatbelt on when asked.” The attorney also branded the flight attendants who interacted with Odell “overzealous,” adding that the staff “insisted on removing everyone from the plane instead of simply allowing Mr Beckham to fasten his seatbelt and proceed with the flight.”