Offset’s Baby Mama on Quavo and Saweetie’s Elevator Altercation: There’s More to It 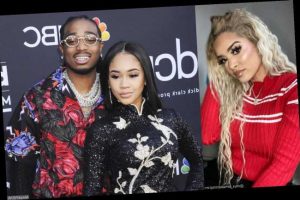 AceShowbiz –Offset‘s baby mama Shya Lamour has shared her insight into Quavo and Saweetie‘s situation, which has got uglier after footage of their elevator altercation surfaced. In the wake of the disturbing video that sparked domestic abuse allegations against her baby daddy’s groupmate, Shya appears to defend the “Congratulations” spitter.

Shya weighed in on the drama between Quavo and Saweetie after an Instagram user blasted the Migos member for “physically assaulting” his then-girlfriend in the video. “This is not an altercation. This is a man clearly physically assaulting his woman. Call it what it is. Domestic Abuse. SMH,” the said person wrote.

But Shya seemed to disagree with the person’s opinion. Replying to the coment, she hinted that there’s more to what people saw in the video as she wrote back, “But this isn’t the whole video,” adding an expressionless face emoji.

Shya isn’t the only one who has shared her two cents on Quavo and Saweetie’s elevator fight. Taking to his own Instagram account, Adrien Broner declared his full support for the Athens-born star as he said, “I ain’t see nothing wrong in that video.”

Calling that kind of physical fight between Quavo and Saweetie “black love,” he claimed, “if me and my significant other don’t argue like that den I don’t want her cause I rather have somebody who might punch me while I’m sleep before I take a beautiful women who go sneak off and f**k another N***a while I’m sleep.” He insisted, “it’s the black tough love for me.”

Adrien further defended Quavo in the caption. “@quavohuncho I’m behind you my n***a keep yo head up we all know you was a great N***a to that women and it ain’t my business but I hate to see another black man get tore down in this world,” he wrote.

The surveillance video obtained by TMZ captured the ex-lovers fighting in an elevator at a Los Angeles apartment building before their split. The “Best Friend” rapper appeared to lash out at the Migos star and they grappled over a Call of Duty case. Saweetie tumbled to the floor as her then-boyfriend stood over her. Quavo eventually exited the elevator as his ex gathered herself and got up.

Neither Quavo nor Saweetie has addressed the elevator fight video, though their previously threw shade at each other on social media following their breakup.