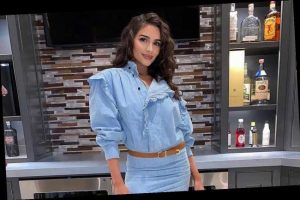 The former Miss Universe talks about her struggle with endometriosis and how it left her being unable to ‘function’ due to the excruciating pain she suffered.

The model and actress revealed she had been diagnosed with the condition – which causes the uterine lining to grow outside of the uterus – last year (20), and has now opened up on her journey to receiving an official diagnosis, which saw her being repeatedly brushed off by doctors.

“It was getting to the point where not only were my periods becoming unbearable, but then I’ve learned also that like another symptom of endometriosis as it’s progressing is you have pain even in between periods,” she told People magazine. “It’s not only even when you’re on your cycle, it could be in between.”

“I really tried my hardest to pretend that it wasn’t there, and just cope and be able to do normal things that I wanted to be able to do. And then eventually, I realised that it was not possible. I just remember being on planes curled up in the foetal position, just crying to myself.”

Olivia says she was told by several doctors that her pain was “normal” even though she knew it wasn’t, and she eventually stopped being able to “function.”

“It slowly takes over your life,” she sighed. “You begin to plan your life around endometriosis because you can’t function. Every month, you don’t know if it’s going to be five times worse than last month, or 10 times worse.”

And after finally getting her diagnosis, Olivia now believes anyone with painful periods should get to a doctor as soon as possible.

“Use all available resources, do your research, go online, go on YouTube, ask your friends’ friend who maybe has endometriosis and create a support system for yourself so that you don’t feel so alone,” the “I Feel Pretty” star urged. “And not only is that empowering and makes you feel better, but it will get you the help that you need.”