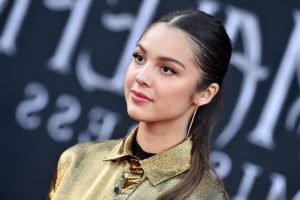 Olivia Rodrigo is calling out a confusing critique of women songwriters she’s noticed as her career has taken off. The singer-songwriter, who skyrocketed to fame thanks to her starring role on High School Musical: The Musical: The Series and the release of her hit single "Drivers License," is already advocating for women in the industry. In a Friday, May 7, interview with The Guardian, Olivia Rodrigo’s quote defending writing songs about boys is a take on the gender inequality of the industry.

When speaking with The Guardian ahead of the release of her debut album, Sour, Rodrigo was asked about that love triangle and whether she thought the overwhelming attention it received was sexist. She replied, “I try not to look at it or take that stuff super seriously.” After a beat, she remarked that there’s a certain “sexist criticism of songwriters like me being told that they only write songs about boys." After touching on the topic, she brought up Taylor Swift, calling past public criticism about the songwriter’s lyrics only discussing relationships "just BS."

Rodrigo explained she writes her songs about the things she’s naturally invested in. “I’m a teenage girl; I write about stuff that I feel really intensely – and I feel heartbreak and longing really intensely – and I think that’s authentic and natural." She added, "I don’t really understand what people want me to write about; do you want me to write a song about income taxes? How am I going to write an emotional song about that?”

“Something I’m really proud of is that this record talks about emotions that are hard to talk about or aren’t really socially acceptable, especially for girls: anger, jealousy, spite, sadness, they’re frowned-upon as bitchy and moaning and complaining or whatever. But I think they’re such valid emotions," she explains.

The 19-year-old also touched on her feelings of insecurity in her songwriting. “I think there’s a lot of strength in saying: I don’t know anything, and I feel so insecure and unwanted,” she said. “If I were a younger person looking up to my favorite songwriter, I’d be really moved by that, so I hope I can provide that.”

Rodrigo also brought up racial inequities, which she said feed into her teenage insecurities. “It’s hard for anyone to grow up in this media where it feels like if you don’t have European features and blond hair and blue eyes, you’re not traditionally pretty," she says. She adds that these feelings have taken her some time to process and destroy. "It’s something I’m still shaking off now," Rodrigo concludes.

While fans of the Disney darling will have to wait for her debut album, Sour, to drop on Friday, May 21, you can catch her in Season 2 of HSMTMTS when it premieres on May 14.