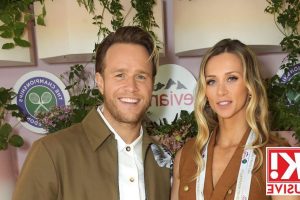 Olly Murs has opened up about his make or break holiday with girlfriend Amelia Tank, recalling how it only made them stronger as a couple.

The singer, who is fronting new Saturday night entertainment show Starstruck, recalled how their first romantic break was a complete game changer in their blossoming relationship.

Asked when he knew Amelia was “the one” after the pair met and hit it off at their local gym, Olly, 37, exclusively told new magazine: “When we went to Morocco on our first holiday together, we both definitely knew.”

The star continued: “It was the first time that we’d spent two weeks together with no breaks. This was two weeks of being solidly together.”

Olly went on to say: “After two or three days, me and Amelia looked at each other and said, ‘Yeah, this is kind of it now, isn’t it?’ We both told each other that we loved each other.”

“When we came back from that trip, Amelia said, “I knew straight away that you were who I was going to spend the rest of my life with,” and I said the same.

Olly then revealed how he secretly knew before they’d jetted off to Morocco that he wanted to spend the rest of his life with Amelia, but that she only realised on the holiday.

He revealed: “Amelia actually put more pressure on herself. She told me afterwards, ‘I thought this was going to be make or break for us.’”

“I was like, ‘Really?! I was already game, set and match!’ But that’s what makes me and Amelia very different. When I know, I know.”

Olly went on to say that he’s so thankful that Amelia came into his life and that she made him change his mind about relationships.

He confessed: “It was such a big thing for me to settle down and such a big moment to make a commitment to someone.”

The former X Factor contestant continued: “I fought against it for so long and then when Amelia came into my life, I couldn’t fight it any more.

“I thought, ‘I’ve got to make it happen and grow up.’ I did and it’s the best decision I’ve ever made.”

This comes after Olly recently opened up about his dreams of starting a family with bodybuilder Amelia.

He recently confided in OK!: “I’d love to be a dad. On my bucket list I set myself small challenges and then big ones.”

“The big ones are to be a dad and have children, and be a No1 best-selling artist again. And maybe one day pick up a BRIT award, that would be pretty special.”

For read more exclusive celebrity interviews with the biggest stars on the box, sign up to our daily OK! Newsletter. Starstruck continues Saturday nights on ITV