Home » Celebrities » Omarion Trolled by LaKeith Stanfield in His DMs

Omarion Trolled by LaKeith Stanfield in His DMs 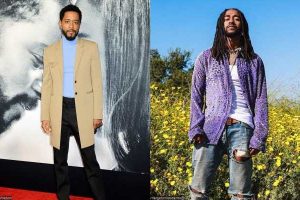 The B2K member gets trolled by the ‘Get Out’ actor as the singer becomes a new internet meme because of the similarities between his name and the Covid-19 variant.

AceShowbiz -LaKeith Stanfield is such a jokester. He poked fun at fellow Hollywood star Omarion on Instagram on Christmas. Instead of sending a happy festive holiday like most people did on the jolly season, the “Get Out” actor trolled the B2K member in his DMs instead.

LaKeith shared a screenshot of his recent private message to Omarion on his page. The actor wrote, “You ruining Christmas for everybody smh,” referring to the new Covid-19 variant, Omicron, that ravaged U.S and the rest of the world. The actor added on his caption, “I’m weak i wonder if he’s gunna respond.”

A lot of LaKeith’s famous followers laughed at the prank. Singer Kehlani and actress Shahadi Wright Joseph left a bunch of laughing, crying emojis to share their thoughts on his antics.

Omarion hasn’t responded to LaKeith’s post but he acknowledged the fact that he had become the latest internet meme due to the similarities between his name and that of the latest Covid variant.

The singer was a good sport as he posted one of the viral memes and wrote, “I can’t stand y’all. [laughing] Happy holidays. Sea moss up. base up. Sun light up. Sending love & healing energy to all.”

Lil Nas X previously name-dropped the “Ice Box” hitmaker as well to lighten up the mood as he opened up about his health scare.

Assuring fans he was doing fine, he quipped, “I’m not sure whether I’ve had the omarion or alicia keys variant of covid but this hasn’t been a fun journey.”

The rapper was forced to pull out of Jingle Ball’s U.K. tour date along with another act Coldplay after being exposed to the virus. “Both acts have had members of their teams test positive for COVID-19 and therefore are not able to perform. We’d like to wish the very best and a speedy recovery to Coldplay, Lil Nas X and their teams,” the organizers explained.

Megan Thee Stallion, Doja Cat, and Jonas Brothers also cancelled some of their scheduled performances due to the Covid outbreak. Meanwhile, Dua Lipa called off her slot because of laryngitis.