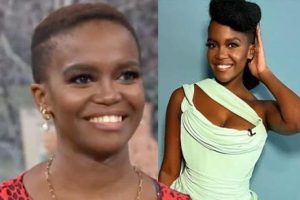 Strictly: AJ and Kai were 'under marked' says Oti Mabuse

Oti Mabuse, 31, stunned many last month when it was announced she would replace John Barrowman as a judge on this year’s Dancing on Ice. The dance professional has hinted she could return to Strictly Come Dancing, however negotiations for the 2022 season are yet to begin.

Many fans of Oti’s feared her sudden move to ITV, four days after Strictly finished, could ruin her chance of returning to the ballroom floor.

Speaking to The Sun on Sunday, Oti revealed: “Those conversations happen in February.

“It will have to be something we talk about as a team.”

Last November, Oti’s exit from Strictly was hinted at due to there being speculation that two dancers were considering quitting the hit show.

Oti was tipped as well as Aljaz Skorjanec being tipped to be leaving the show.

At the time, the speculation prompted a show source to say: “Bosses will worry other stars could follow.”

Oti admitted last week that although she “loves” Strictly, she is not sure what her future is on the show.

Speaking to Fabulous magazine last weekend, she said: “I really love Strictly, and we just had the final and all that emotion. Did you see me [during the final]? I looked like a mess.

“It has been such a big part of my life. The best part of my whole dancing career has been Strictly.

Oti joined Strictly in 2015 and has since become the most successful professional in the history of the show.

She lifted the Glitterball Trophy for two consecutive years with partners Kelvin Fletcher and Bill Bailey.

The Latin American champion first hinted she would leave the dancing show in April 2021.

Speaking prior to the latest series, Oti told The Telegraph: “I love to dance, and I also love bringing joy to so many people. But, I think that will be the last one.”

She said “as a woman” she “can’t dance forever” and even teased she would like to open her own dance studio.

Oti did backtrack as she said she will make sure to take it “a season at a time”.

“This is the thing. You can say something… then you walk on to that floor and see your whole family and there’s so much love and passion that you kinda go: ‘It’s amazing to feel amazing.’”

You can watch Dancing on Ice this evening at 6.30pm on ITV.