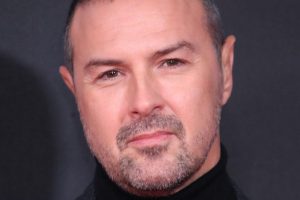 Paddy McGuinness has made a lighthearted return to social media just days after revealing that he and wife of 11 years Christine McGuinness have split.

Rumours about the couple’s relationship have been the subject of much public scrutiny in recent months, with the pair officially announcing the they had separated in a joint statement released last week.

Since sharing the news, both Christine and Paddy have remained silent on social media, but the Lancashire funnyman broke that silence on Wednesday 27 July as he revealed he was in the process of filming another episode of motoring show Top Gear.

The 48 year old comedian kicked things off with a video on his Instagram stories that revealed a car boot brimming with sweets and chocolate, that included everything from Haribo to Oreo, and even a few nākd snack bars thrown in for good measure.

Over the clip, Paddy could be heard saying: "Back on Top Gear and we take our snacking very seriously.”

He then proceeded to point out which snacks belonged to his co-stars Chris Harris and Freddie Flintoff, as he zoomed in on the various items, before staking his claim on his own favourite.

Appearing to be in high spirits, Paddy said: “This is Harris', he likes his peppermint Aeros. Ooh white Snickers – them's Fred's and a big box of biscuits – they're mine.”

The latest post marks a welcome return to form for the Take Me Out host as he showcases the trademark humour that has been notably absent throughout the speculation regarding his marriage.

While Paddy himself has remained tight lipped on the subject, his estranged wife Christine has been far more vocal as she opened up about her struggles.

The doting mum, who shares three children with Paddy, recently revealed that they had been going through a “very difficult time” before ominously adding that it “wasn’t her who put them in this position.”

Attributing the highs and lows to the length of their marriage, Christine told Carol Vorderman on ITV’s Lorraine, that "marriages go through ups and downs anyway. Especially long ones like ours.

"It's not always going to be plain sailing but we're trying to deal with things as privately as possible.”

Although the news was only officially announced last week, the couple revealed that they had actually made the decision to separate “a while ago”.

Confirming their separation on Instagram, they said: "We hadn't planned on sharing this publicly until we were ready but the lack of privacy surrounding our personal life, we feel left with no other option but to clarify.

“A while ago we took the difficult decision to separate but our main focus was as always is to continue loving and supporting our children.

Although the couple announced they were parting ways, they still vowed to put their children first as they continue to live in the family’s Cheshire mansion.

They continued: ”This was not an easy decision to make but we're moving forward as the best parents we can be for our three beautiful children.

"We'll always be a loving family, we still have a great relationship and still live happily in our family home together.”

The pair officially tied the knot in June 2011 after dating for four years.

Between them, they share three children together, twins Leo and Penelope, eight, and daughter Felicity, five – all of whom have been diagnosed with autism.