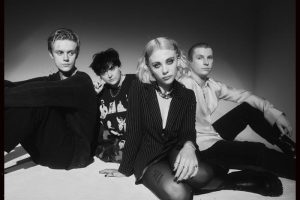 Pale Waves recently dropped a glitzy new video for their latest single, “Clean,” which features on their third album, Unwanted.

The video was shot at London’s Rivoli Ballroom. It shows the band performing in an empty room at the venue, as scenes show the singer and guitarist Heather Baron-Gracie holding a press conference.

According to Barron-Gracie, “Clean” is for “for the LGBTQ community.” “‘Clean’ is about that honeymoon stage of a relationship where you can’t get enough of them – you want to be immersed in them every single second. You’re the one girl that I just can’t get enough of,” she said.