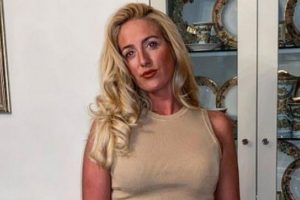 Paris Fury has taken to her Instagram to share sweet snaps with four of her children wearing matching outfits as they have fun at fair.

Paris, 31, shared the pictures and cute video with her one million followers as the sweet brood posed for the camera.

Tyson Jr and his younger brother Adonis could be seen with beige shorts and orange polo shirts as they grinned and Adonis gave a thumbs up to the camera.

Valencia and baby Athena wore matching pink floral dresses for their day out with mum at the fair.

The youngsters posed with fair snacks and slushie drinks as Paris captioned the sweet snap: “Love my little crew even though they’re hard work.”

The mum of six also posted a gorgeous picture of Adonis and Valencia grinning on the carousel and older brother Tyson could be seen smiling on the horse behind them.

The wife of boxer Tyson Fury also shared a short video of Tyson, Adonis and Valencia jumping on trampolines.

She captioned the family video: “Tyson, Adonis and Valencia loving the sun.”

Paris and Tyson are childhood sweethearts and share six children between them. Dad Tyson, 33, spoke out recently about the reasons behind their children’s unique names.

The star explained hisreasons behind his sons names, and why Prince is the chosen moniker for three of them.

Fury himself is nicknamed 'The Gypsy King' and said in his TV documentary: "I'm a king and they're princes until they earn their rightful name."

Tyson and Paris' daughters have the names Venezuela, Valencia Amber, and then there's newborn Athena.

Further discussing why they chose the unique names they have in the past, Tyson touched on the topic by saying: "My wife is called Paris. I'm Tyson and [gesturing to his son] he's called Prince John James. If the girl had a normal name it wouldn't fit in, would it?"

So it can be assumed that they've chosen the monikers they have in order to fit in with the other unique names given to their children.

Paris previously hinted atwhat inspired their daughter's name of Athena,Tyson showed a plague of goddess Athena which gave fans a clue as to why he'd chosen the name.

Tyson himself is named after legendary boxer Mike Tyson and he's previously explained why his own father bestowed the name upon him.

The boxer's dad, John, said Iron Mike was the inspiration behind his son’s name, as the fighter was reigning supreme when he was born in 1988.