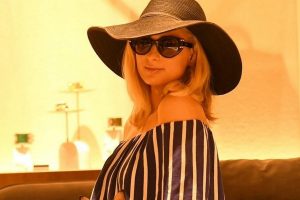 The ‘This Is Paris’ star laughs off the rumors suggesting she has a bun in the oven, blaming a push-up bra during a recent wedding gown fitting for the pregnancy reports.

The socialite and DJ reveals she woke up on Tuesday (27Jul21) to “about 3,000 texts” after it was reported she’s expecting her first child, but Paris insists she’s not quite there yet and she’s waiting until after her wedding to fiance Carter Reum to start a family with him.

In a “This Is Paris” podcast episode posted on Tuesday, Hilton said, “I’ve heard from people I haven’t heard from in years. Thank you everyone for all the messages. I am pregnant with triplets.”

She then explained she was joking and told fans she believes the pregnancy rumour began when she was photographed in a push-up bra during a recent wedding gown fitting.

Hilton, 40, revealed she was undergoing In vitro fertilisation (IVF) treatments in an effort to become a mum at the beginning of 2021, just before announcing her engagement to venture capitalist Reum.

Her upcoming nuptials will be filmed for her new reality TV show. “We just started shooting our new show, Paris in Love, on Peacock and we’re shooting in New York just now, actually, and getting ready for the dress fitting and just planning the bachelorette party. There’s a lot,” she previously revealed.

The hotel heiress recently said her perspective in life changed. She shifted her goal from money to baby as she is looking forward to settling down with her husband-to-be.

“It was such a goal of mine before because I wasn’t happy in my personal life,” she said. “And also just going through what I went through, I always saw money as freedom and independence, and not being controlled. And I think that’s why I just had that as my focus in life. And now that I am so incredibly happy and in love in my personal life I’m not really interested in billions anymore. I’m more interested in babies.”