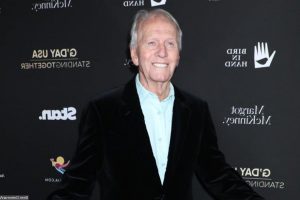 Setting the record straight on reports of him leaving ‘my house not yours’ note to homeless outside his mansion, the ‘Crocodile Dundee’ star claims to have just written his house number for access point.

AceShowbiz –Paul Hogan has made it clear that he wasn’t the one leaving an angry warning in front of his Los Angeles home. Setting the record straight on reports that he was having issues with the homeless people outside his mansion, the “Crocodile Dundee” star stressed that he has “great empathy” for them.

Via his representative, the 81-year-old actor informed Channel Seven’s “The Morning Show” that he “did not leave a note outside my house in Venice Beach aimed at the homeless or anyone else.” In his statement, he continued insisting, “I didn’t write it. I didn’t place it there. I didn’t understand it.”

The actor went on to claim, “I have great empathy for the homeless and have never had any issues with vulnerable people near my house and assist them where possible.” On what he really did when captured on camera writing on a pole outside his house, he clarified, “I wrote my house number on a pole as I had a workman coming and he needed an access point.”

“After writing the number, I noticed the before mentioned note on a pole alongside,” Paul continued. He then felt that the red-inked message “was odd.” Elsewhere in his statement, he said, “So to have false reports that I would disrespect anyone, let alone out most vulnerable in such a way is appalling and completely false reporting.”

One day earlier, the “The Very Excellent Mr. Dundee” star has also offered denial that he was the one writing the angry warning note. On Wednesday, May 19, he told TMZ in an interview, “It wasn’t me who put [the note] up.” He further claimed that he “doesn’t know why” somebody put the sign up.

Addressing the homeless situation in Los Angeles, Paul admitted, “I just find it sad.” He explained further, “California has the fifth biggest economy in the world and we’ve got more homeless people than Bangladesh. I find it awful and embarrassing. I wish I could do something about it.”

During the interview, Paul also revealed that he actually rented the mansion. He opened up, “I took it down and it’s not my house anyway.” However, when he was asked if his family was doing well, he said with a laugh, “Yeah, no problem. I’m happy in my mega-mansion.”

Paul was captured putting a hand-written note on a pole next to his house’s garage door on Sunday, May 16. In the photos obtained by Daily Mail, the simple message in red ink read, “THIS IS MY HOUSE NOT YOURS.”