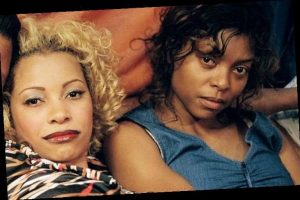 The ‘House Divided’ actress recalls teaming up with her ‘Hustle and Flow’ co-star to warn a woman against a man they thought was bad news while clubbing in Los Angeles.

AceShowbiz –Paula Jai Parker and Taraji P. Henson once worked together to help a woman avoid a suitor they thought was bad news in a Los Angeles nightclub.

The pair were out together when Parker recalled witnessing the guy making advances while on the dance floor, with both actresses deciding to intervene.

“Taraji and I actually bumped heads warning this one chick like, literally, on the dance floor,” she tells the New York Post’s Page Six column. “We were literally telling her, ‘Don’t dance with that man right there! Don’t do it!’ “

The pair were so passionate, according to Parker, that “we turned around and bumped heads and we were a little dizzy,” with Henson advising her pal, ” ‘Don’t act dizzy, don’t act dizzy!’ We were like, ‘Stay cool, stay cool.’ We hoped nobody saw us.”

She said of the incident, “Let’s put our heads together… We warned that girl… She kept dancing for a minute with him, but then she stopped. So I think she heard us… It worked out very well for her now.”

Paula Jai Parker and Taraji P. Henson worked together for 2005’s critically-lauded movie “Hustle & Flow“. They shared screen with the likes of Terrence Howard, Anthony Anderson, Taryn Manning, and Ludacris. It earned Howard an Oscar nomination for Best Actor in a Leading Role.

Parker is now starring on webseries “Crown Lake” and soap opera “A House Divided“. She was nominated for Best Lead Actress in Drama at the Indie Series Award, thanks to her role as Stephanie Sanders on the “House Divided.”