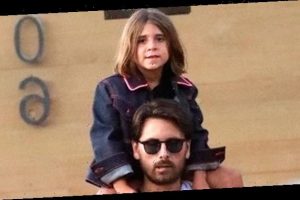 Social media sensation Addison Rae, 19, has been making a number of appearances with Kourtney Kardashian, 41, and her kids on TikTok, but on July 17, it was Scott Disick‘s turn to partake in a hot new dance video with her. Unfortunately for the 37-year-old reality TV star, his daughter, Penelope, 8, walked through the frame halfway through the video, and laughter ensued.

Dressed in a bright yellow button-up shirt, with sunglasses and a hat on, Scott teamed up with the major TikTok star, who’s recently produced videos with both Kourtney and their son, Mason Disick, 10, for some fun in front of the camera. As you can see in the short clip below, Scott could barely keep up with Addison’s tight choreography, so maybe Penelope’s intrusion helped make this video a success? It all depends on how you look at it, of course.

Either way, Addison thought Penelope’s walk-on role was pretty funny (so did we), as she immediately fell into a fit of laughter after Scott’s daughter breezed by. And who could blame her? Kids do the darndest things and all we can do is laugh. And quite honestly, we could all use a bit of laughter right now, right?

As we previously revealed, just a few weeks ago, Mason made his own appearance in a TikTok video with Kourtney and Addison on June 21, as they danced along to “100 Racks” by Quality Control and Offset. So now that Addison has done videos with both Mason and Penelope, could Scott and Kourtney’s youngest child, Reign, 5, be due for his own cameo? Our fingers are crossed.