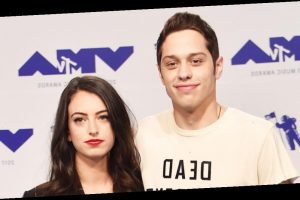 Pete Davidson is reacting to his ex girlfriend Cazzie David‘s new book of essays titled, “No One Asked for This,” which features one whole essay about their seemingly messy split. If you don’t know, immediately after Pete and Cazzie‘s relationship ended he began dating, and eventually proposed to, Ariana Grande.

“I’m really happy for her,” Pete told Insider. “It did well, and, you know, we’re cool. I wish her nothing but the best. I think she wrote a really funny book and I hope it stays on the chart.”

Cazzie thanked Pete in the acknowledgements of her book, saying, “Pete. I love you. Thank you for being encouraging when you did not have to be. Your bravery inspires me and your friendship means the world to me.”

Meanwhile, earlier in 2020, Pete spilled intimate details about every single one of his famous exes including Ariana, Kate Beckinsale, and more.

END_OF_DOCUMENT_TOKEN_TO_BE_REPLACED

END_OF_DOCUMENT_TOKEN_TO_BE_REPLACED
We and our partners use cookies on this site to improve our service, perform analytics, personalize advertising, measure advertising performance, and remember website preferences.Ok