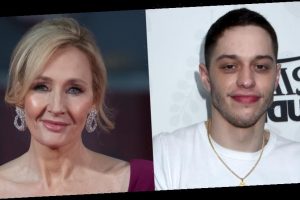 The 26-year-old King of Staten Island star responded to the Harry Potter author’s past transphobic comments during “Weekend Update” on Saturday Night Live on Saturday (October 10).

PHOTOS: Check out the latest pics of Pete Davidson

“I long for a few young years ago when the worst things she did were those Fantastic Beasts movies. No discrimination there, they harmed us all equally,” he joked on the show.

He defended his six Harry Potter tattoos, saying he “didn’t know that J.K. Rowling was going to go all Mel Gibson,.”

“I have a Game of Thrones tattoo and now I’m terrified [author] George R.R. Martin is going to be like, ‘Hey, if you enjoyed what I had to say about dragons and dire wolves, wait till you hear what I think about Puerto Ricans.’ It’s crazy times we live in! It’s not fair.”

“What’s wrong with her? She creates a seven-book fantasy series about all types of mythical creatures living in harmony with wizards and elves and the one thing she can’t wrap her head around is Laverne Cox? She’s a national treasure,” he continued.

One of the Harry Potter stars also recently came out against J. K. Rowling.

END_OF_DOCUMENT_TOKEN_TO_BE_REPLACED

END_OF_DOCUMENT_TOKEN_TO_BE_REPLACED
We and our partners use cookies on this site to improve our service, perform analytics, personalize advertising, measure advertising performance, and remember website preferences.Ok