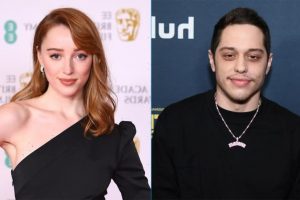 Pete Davidson and Phoebe Dynevor have officially set their relationship status to public.

The “Saturday Night Live” performer and “Bridgerton” star made their first appearance together in a social setting when they hit the courts as spectators on day six of the Wimbledon Tennis Championships and pictures snapped of the couple on Saturday prove that they are smitten.

In images from the day at the courts, Davidson, 27, can be seen flashing the biggest of grins as Dynevor, 26, plants a smooch on his cheek as the pair coordinated in matching hues of green – one of the signature colors of the famed tennis tournament.

Throughout their time at the exclusive All England Lawn Tennis and Croquet Club, the young couple engaged with the crowd, took selfies, laughed and simply basked in each other’s presence in the wake of recent sentiments Davidson exuded that he was considering bringing his time on the famed “SNL” to a close. 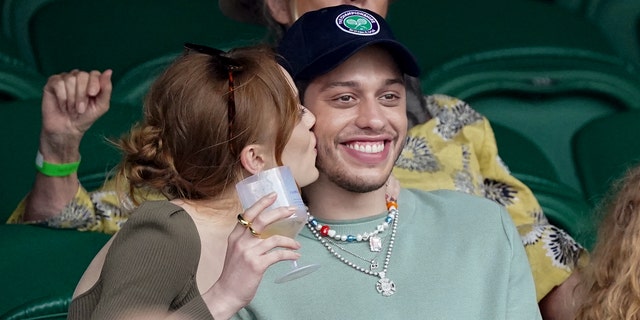 Phoebe Dynevor and Pete Davidson exchange sweet gestures on day 6 of the Wimbledon Tennis Championships at the All England Lawn Tennis and Croquet Club on July 03, 2021 in London. (Photo by Karwai Tang/WireImage)

Another image shows the actress playing with Davidson’s ear while another displays Dynevor resting her head on Davidson’s shoulder.

Davidson and Dynevor sparked dating rumors back in March when an eyewitness relayed to the outlet that they were getting close while the pair were in the United Kingdom.

Shortly after, another insider told ET that Dynevor and Davidson “really hit it off” after meeting at a New York City shindig.

“They started off as friends and quickly realized there was chemistry between [them],” the source said. “Pete and Phoebe started out casually dating but things have gotten a bit more serious recently.” Phoebe Dynevor rests her head on Pete Davidson’s shoulder at Wimbledon Tennis Championships at the All England Lawn Tennis and Croquet Club on July 03, 2021 in London. (Photo by Karwai Tang/WireImage)

The source added that Davidson and Dynevor “have traveled between New York City and England to spend time with one another while also working.”

A month later, the couple was spotted together while leaving a supermarket near Stoke-on-Trent, an English city just south of Manchester and photos obtained by the Daily Mail revealed the pair to be laughing hysterically while embracing each other.