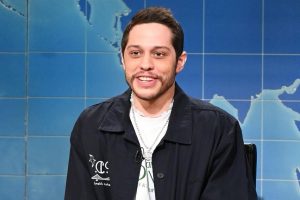 Pete Davidson is officially ready to have kids. Like, soon. The former SNL star made this somewhat unexpected announcement in a preview of Kevin Hart’s Hart to Heart, saying he is “definitely a family guy” and that his dream is to have a child.

“My favorite thing ever, which I have yet to achieve, I wanna have a kid,” he told Kevin. “That’s like my dream. It’s like, super corny, but it would be so fun. Dress up the little dude. It’s just like, I’m so excited for that chapter.”

He then added that he’s busy preparing for fatherhood, saying “That’s kind of what I’m just preparing for now, is just trying to be as good as a dude, develop and get better so when that happens it’s just easier.”

Probably a good time to casually mention that Pete is currently in a pretty serious relationship with Kim Kardashian. The couple have been together for almost 12 months (it’ll be a year in October!) and are apparently fully obsessed with each other.

And, um, because you’re politely wondering, Kim Kardashian recently hinted that she also might want more children during a game of “Most Likely” with Access back in April. When the question “mostly likely to have as many kids” as Kris Jenner came up, everyone in the Kardashian family held up a photo of Kourtney except for Kim, who went ahead and held up a picture of herself and her sister. Just saying!

Meanwhile, a source recently told Entertainment Tonight that not only are Pete and Kim absolutely in love, “he is so amazing with her children and she loves seeing him be silly with them and take an interest in their lives.”