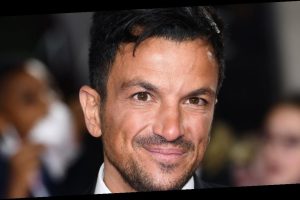 Peter Andre has surprised fans with what appears to be a brand new tattoo on his neck.

The Mysterious Girl singer, 47, posted a photo of himself looking dapper where he gave his 1.6million Instagram followers a glance at the inking.

Peter’s selfie shows him standing in front of a mirror while taking the photo.

Dad-of-four Peter, who is considering a vasectomy according to his wife Emily, wore a crisp white shirt, which was halfway unbuttoned along with a pair of navy blue suit trousers. Clearly a natural in front of the camera, he confidently posed as he stood in front of a green sofa with white patterned cushions on.

As Peter posted the photo he teased an upcoming project in the caption.

He wrote: “Getting ready for something special,” followed by a smiling face emoji.

Peter’s hunky photo received more than 31,000 likes from fans, with some gushing over the handsome singer in the comments. One wrote: “Can't beat a man in a crisp white shirt”.

However, others couldn’t help but quiz Peter, who admitted he’s worried about his elderly parents, over the apparent new inking on his neck.

One asked: “What’s on your neck,” followed by a string of side eye emojis. While another said: “is it real is what i was thinking?” and a third quizzed: “What is that in your neck – looking stunning as always”.

A fourth fan then chimed in with: “not a tattoo??”

As another wrote: “Look great, that’s not a real neck tattoo though is it!? Nooooo!” [sic]

Peter previously admitted he stopped getting “addictive” tattoos after marrying wife Emily in 2015.

He wrote in his new magazine column at the time: “I reckon that if I were on my own – as in, still single – I would have got a few more because they can be very addictive.

“But Emily isn’t a fan of them, so when we got together, I decided not to have any more.”

Peter once had an inking dedicated to ex wife Katie Price on his finger, but had it removed in 2010 following their split.

He also has two tattoos on bicep, followed by another inking on the underside of his other arm.

END_OF_DOCUMENT_TOKEN_TO_BE_REPLACED

END_OF_DOCUMENT_TOKEN_TO_BE_REPLACED
We and our partners use cookies on this site to improve our service, perform analytics, personalize advertising, measure advertising performance, and remember website preferences.Ok