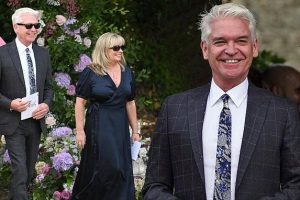 Phillip Schofield put on a united display with his estranged wife Stephanie Lowe as they attended Ant McPartlin and Anne-Marie Corbett’s star-studded wedding on Saturday.

The former couple, who would have been together 28 years in March, separated in early 2020 because the TV presenter, 59, came out as gay.

Phil, 59 and Steph, 57, appeared in high spirits as they arrived at St Michael’s Church, alongside the likes of Alesha Dixon, David Walliams and Dermot O’Leary, but Holly Willoughby missed the ceremony because she was on holiday. 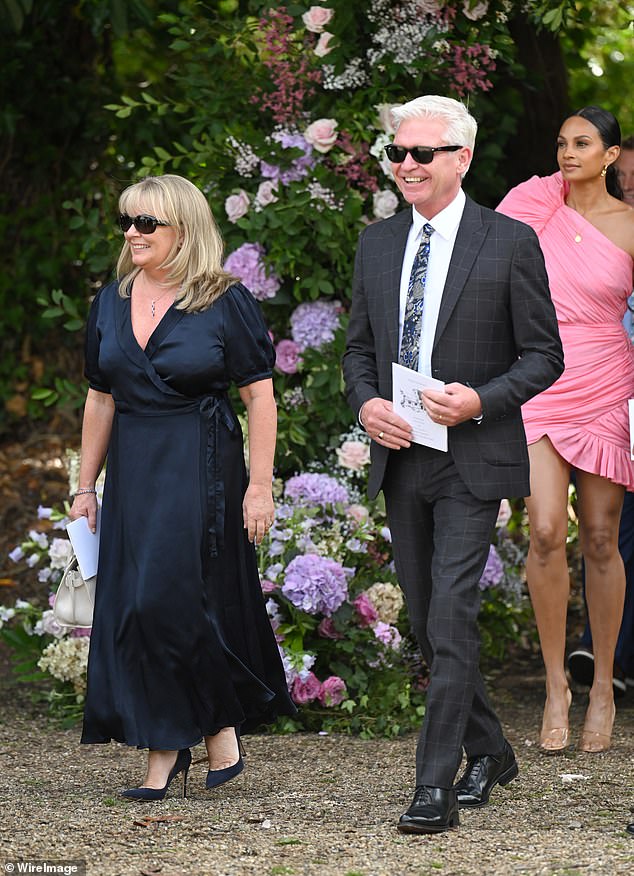 Friends: Phillip Schofield put on a united display with his estranged wife Stephanie Lowe as they attended Ant McPartlin and Anne-Marie Corbett’s star-studded wedding on Saturday

The pair of them looked very glamorous for the event, as Phillip opted for a grey checked suit paired with a crisp white shirt and patterned blue tie.

Stephanie looked stunning in a very dark navy blue wrap dress which came down to her ankles to reveal black stilettos.

The pair looked very cool as they donned black sunglasses while leaving the church. 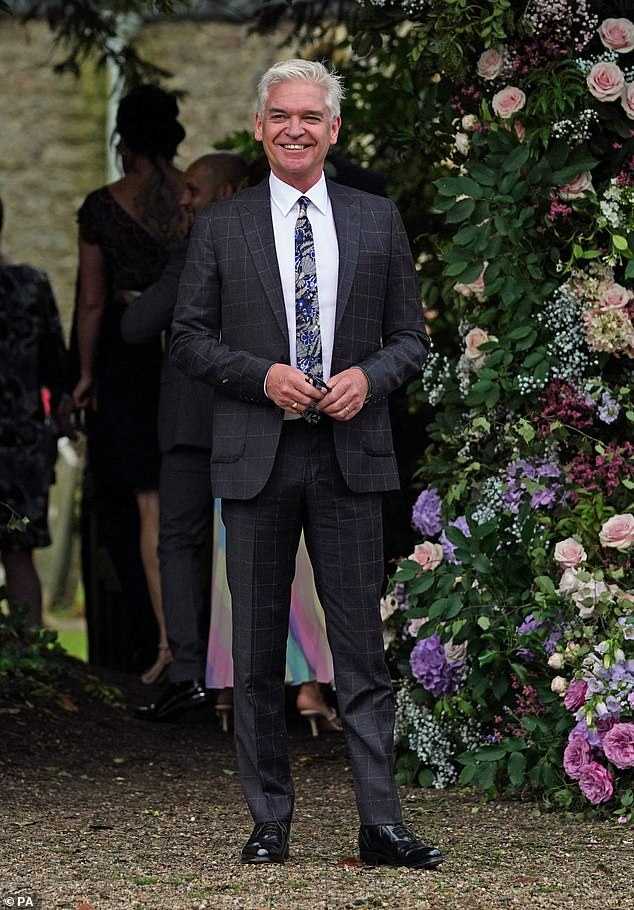 Still amicable: The couple, who would have been together 28 years in March, separated last year because the TV presenter, 59, came out as gay 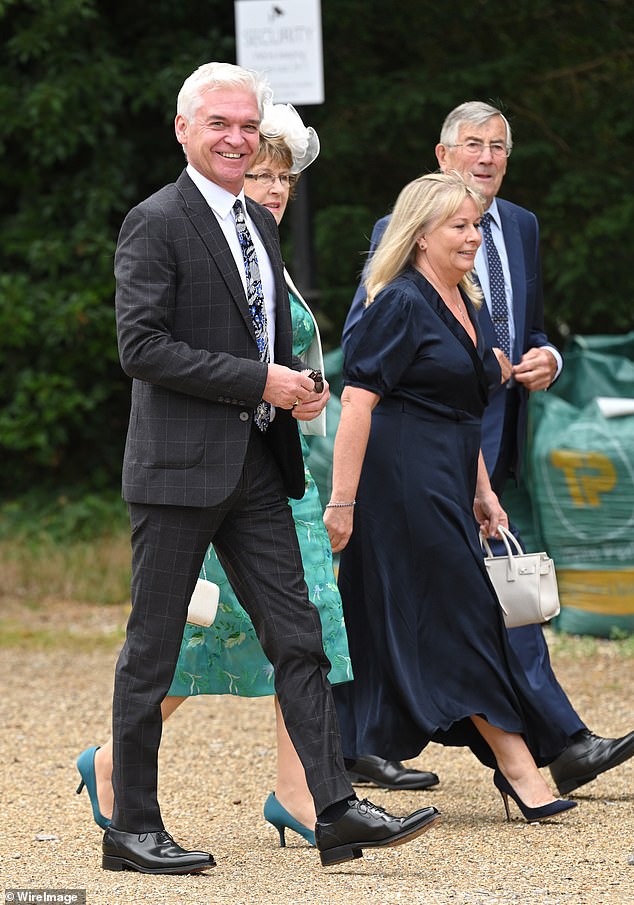 Dressed to impress: The pair of them looked very glamorous for the event, as Phillip opted for a grey checked suit paired with a crisp white shirt and patterned blue tie

The presenter said of the wedding ceremony: ‘it was amazing and great fun’.

Many believed Holly would be in attendance at the wedding, but was unable to make it because her and her husband Dan Baldwin are on holiday.

Another star who was invited and unable to come was Britain’s Got Talent judge Amanda Holden.

The BGT judge, 50, is also holidaying and took to Instagram to express her sadness of not being able to attend. 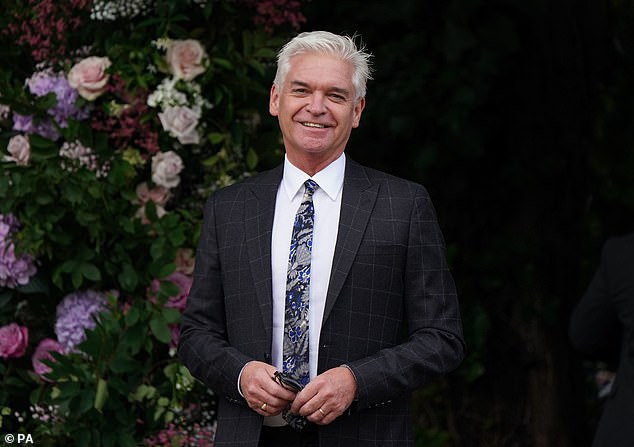 What happens next? The This Morning star insisted that the two of them hadn’t discussed divorce

Phil without Holly: Phillip left the church after Ant’s wedding saying he ‘really enjoyed it’ after his This Morning co-host Holly Willoughby was unable to make it

The television personality has worked with Ant for years on Britain’s Got Talent, and sent her well wishes to the happy couple, ahead of the nuptials.

Other guests who were in attendance included, Stephen Mulhern, David Walliams, Christine Lampard and Alesha Dixon. 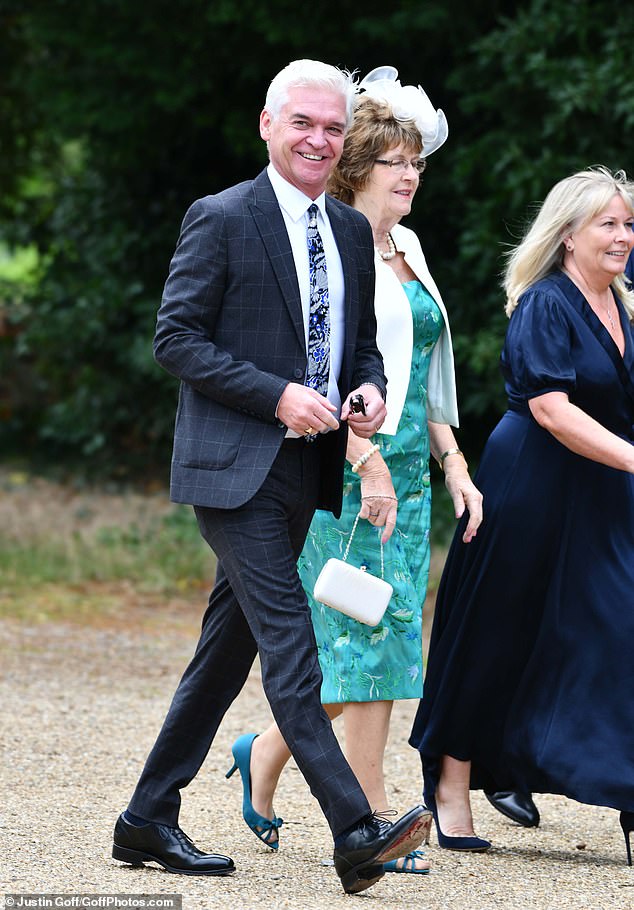 Missing one: Many believed Holly would be in attendance at the wedding, but was unable to make it because her and her husband Dan Baldwin are on holiday

Good times: He was quoted to have said: ‘it was amazing and great fun’ about the star-studded ceremony in Hampshire on Saturday

The This Morning star called their relationship a ‘work in progress’ earlier this year and insisted they hadn’t discussed divorce.

Late last year, the host admitted he is ‘not fixed in any way’ and he still has to ‘come to terms’ with his life after publicly coming out as gay in February.

Talking about his family on BBC Radio 5 Live, the Dancing On Ice star said: ‘We love each other massively. We are a loving family, that hasn’t changed… it’s us four but different. 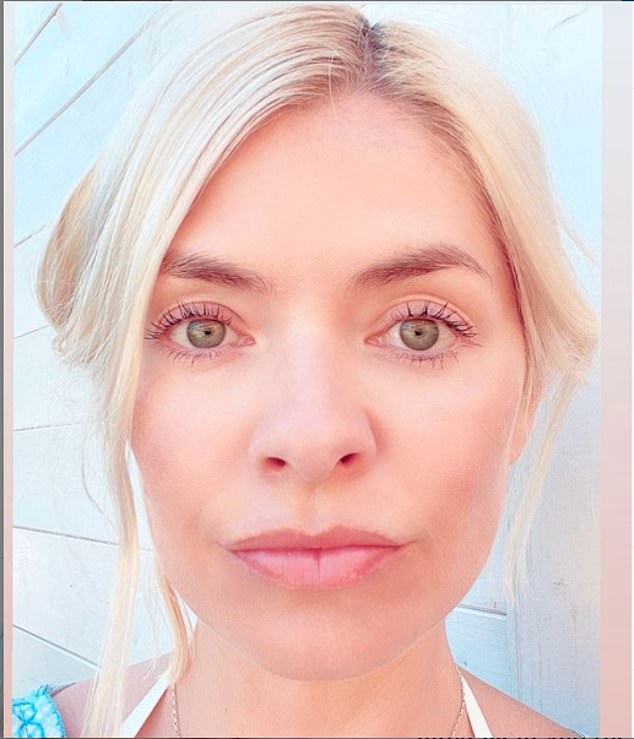 Absent: Holly, who was invited to the wedding and couldn’t make it, took to Instagram on Friday to post a fresh faced selfie while enjoying her time away

‘We are a work in progress. I’ve been very honest about all of this and there’s no question, we have to pick our way through this daily as a family.

‘And that’s what we are doing. We are making our way through very unusual and unexpected waters.’

The media personality also explained how a legal end to their marriage has not been brought up, telling Chris Evans on his How To Wow podcast: ‘I’m still married to Steph. There is a great deal of talk of divorce – we have not discussed that at all.’ 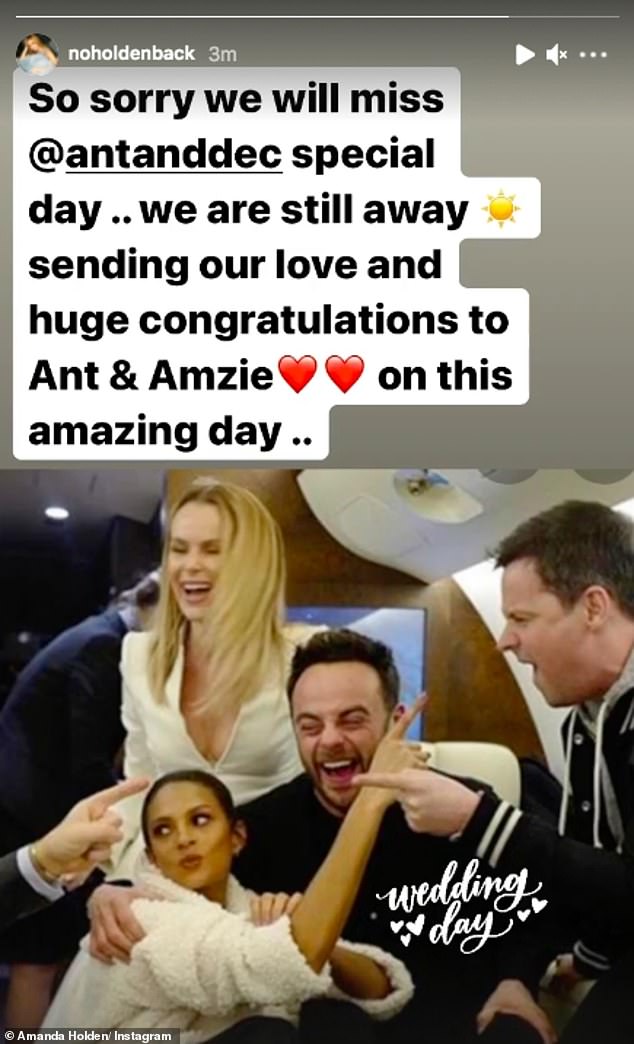 Missing out: Amanda Holden took to Instagram to express her sadness about not being able to make her her pal Ant’s wedding to Anne-Marie Corbett because she is away on holiday

The father-of-two has credited his longtime spouse for being supportive following his revelation.

The TV star previously told co-star Holly Willoughby on This Morning: ‘There’s no one in my life who would have supported me the way, as a wife, as the way she supported me. She’s astonishing, literally astonishing.’

Anne-Marie stunned in an elegant wedding gown as she arrived for her star-studded nuptials to Ant McPartlin in Hampshire. 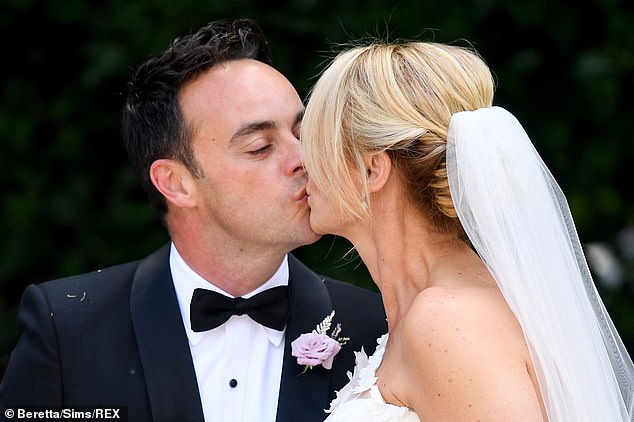 Married! Ant and Anne-Marie Corbett shared a kiss outside the church after saying their vows 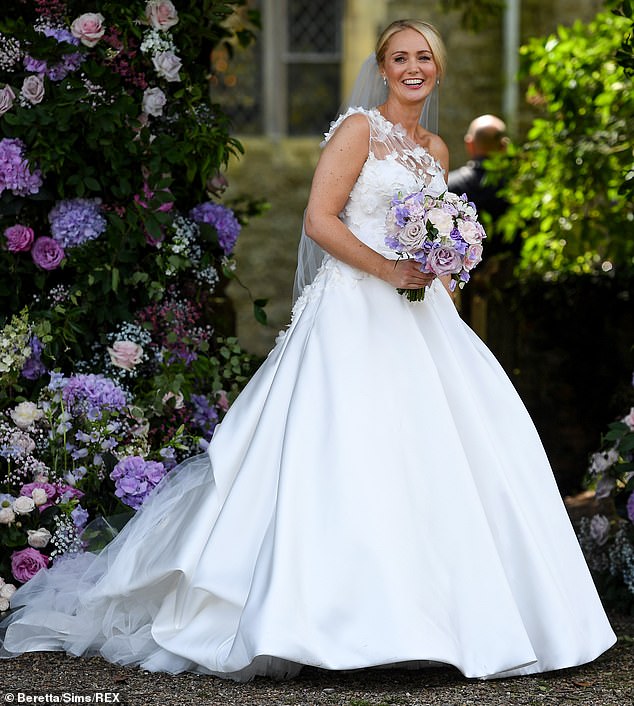 Wow: Anne-Marie looked stunning in her gorgeous wedding gown as she arrived for her nuptials to Ant McPartlin in Hampshire on Saturday

The bride, 43, was radiant in the bespoke floor-length dress by designer Suzanne Neville that featured an off-the-shoulder design with lace detailing as she carried a beautiful bunch of white and purple roses.

She wore a long veil which flowed down the back of her dress and pinned her blonde tresses back in a chic up do while opting for glowing makeup.

Meanwhile Ant gave a beaming smile as he arrived at the church with Best Man Declan Donnelly just before Anne-Marie made her show-stopping appearance.

The presenter, 45, cut a dapper figure in a black suit and bow tie as he headed into the service alongside his fellow Geordie pal Dec.

The bride was driven up to the church in a black Rolls-Royce Cullinan and was helped out of the car by event manager Jason Morais who held up her long train. 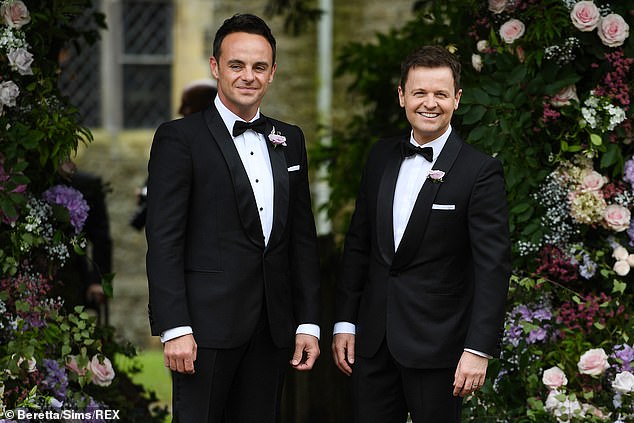 Big day: Ant gave a beaming smile as he arrived for his wedding to Anne-Marie with Best Man Declan Donnelly