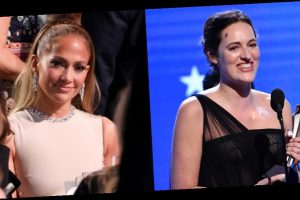 Fleabag was a big winner at the 2020 Critics’ Choice Awards and star/creator Phoebe Waller-Bridge revealed something interesting during a speech!

The 34-year-old actress revealed the inspiration for the show’s second season while accepting Best Comedy Series at the event on Sunday (January 12) at the Barker Hangar in Santa Monica, Calif.

Phoebe said that Jennifer Lopez was the inspiration for the show’s second season and that the Hot Priest’s favorite song was “Jenny From the Block.”

Jennifer was also at the event as a nominee for Best Supporting Actress for her work in Hustlers.

END_OF_DOCUMENT_TOKEN_TO_BE_REPLACED

END_OF_DOCUMENT_TOKEN_TO_BE_REPLACED
We and our partners use cookies on this site to improve our service, perform analytics, personalize advertising, measure advertising performance, and remember website preferences.Ok