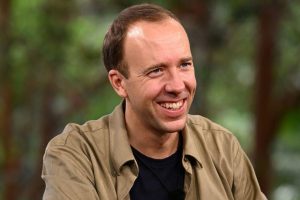 Piers Morgan has spoken out about an awkward encounter with Tory MP Matt Hancock, who was returning to the UK from Australia.

After three weeks in the, I'm a Celebrity… Get Me Out of Here jungle, coming third behind Hollyoaks’ Owen Warner and winner Jill Scott, Matt Hancock reunited with his former aide and current girlfriend, Gina Coladangelo.

The two embraced on the famed I’m a Celeb bridge, with some fans joking that they were recreating their infamous cheating scandal photograph.

Matt and Gina did not attend the various parties and dinners following the show, and Gina later returned to the UK alone as her boyfriend cashed in on his redemption arc in a lucrative interview.

On Tuesday, while returning to the UK from interviews in the US, Piers, 57, bumped into the MP for West Suffolk in Heathrow, and the encounter went about as well as you’d expect.

I told him I’d been giving him a good kicking the entire time he was in the jungle. He said he knew. It was the purest personification of #Awks.”

Reacting to the awkward moment, one Twitter user replied: “And then everyone at the airport clapped.”

“Aren't you big,” another jabbed, while a third added, “You asked for an interview first you? (Don't lie).”

Other users didn’t believe Piers at all, while others poked fun at his Cristiano Ronaldo “obsession.”

Since arriving in the jungle alongside comedian Seann Walsh, Matt Hancock has been slammed online, in the press, and just about every other corner of the internet you could think of.

The former Health Secretary butted heads with Scarlette Douglas, Boy George, and Charlene White on the show, with DJ Chris Moyles and Mike Tindall, also taking issue with his inclusion.

Matt will certainly be in the hot seat in the coming weeks after ditching his commitments as a sitting MP to eat animal body parts halfway across the world.

Speaking on an I’m a Celeb homecoming special, which is set to air on Thursday night, Gina, 33, admitted that Matt greatly underestimated the reaction back home.

"I think it's fair to say that Matt underestimated the scale of the reaction to him coming into the jungle,” Gina told the cameras.

"He's made of tough stuff, this summer we trekked around Mont Blanc together in 4 days.”

She added: "My last words to him were 'Just be yourself, be the Matt I know and it'll go really well.'"

Shocker, it did not go well, and despite earning 21.72% of the final vote, a lot of people are still very angry.

As one nurse pointed out on Twitter: “I really couldn't care less how cheerfully or humbly Matt Hancock eats a camel's penis.

“Nurses in my hospital died of the Covid they caught there, thanks to inadequate PPE.

“He authorised sending residents back to care homes when we knew they had Covid.