Piers Morgan, 54, responded to a tweet from Alastair Campbell, 62, who admitted during a Q&A session that he would take on the Good Morning Britain host in a boxing match. However, Tony Blair’s former political aide did not stop with the drama as he added Piers would “lose” if the fight ever took place.

Seriously, if you want a fight, I’m on for one.

In view of his 6.9 million followers, Piers retweeted a post from Alastair which read: “Hey @piersmorgan,” with a link to a video clip requesting a fighting challenge.

The Good Morning Britain presenter replied: “Seriously, if you want a fight, I’m on for one. Wembley Stadium, PPV. We could make KSI/Logan look like a tea party. cc @EddieHearn @frankwarren_tv.”

The ITV favourite referred to YouTube stars KSI and Logan Paul who competed in an amateur boxing match earlier this month.

Fans inundated the GMB host with comments, with many hoping the boxing match goes ahead. 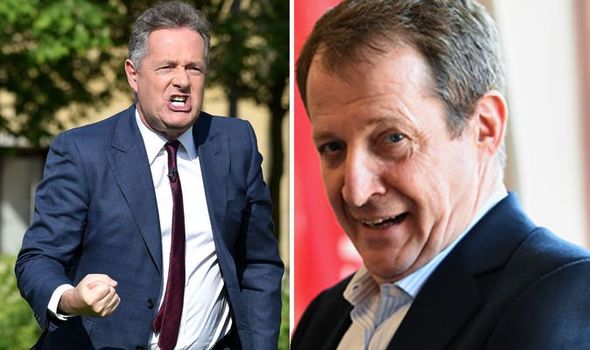 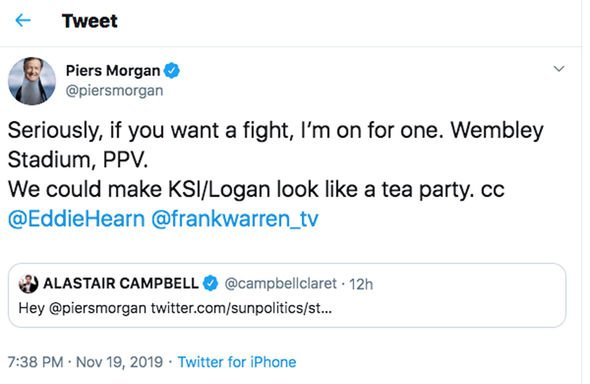 Another person quipped: “My money is on Piers Morgan.”

While a third person added: “I would like to pay money to watch this. Do it.”

The fight challenge comes after a publication asked Alastair if he would take on Piers in a charity boxing match. 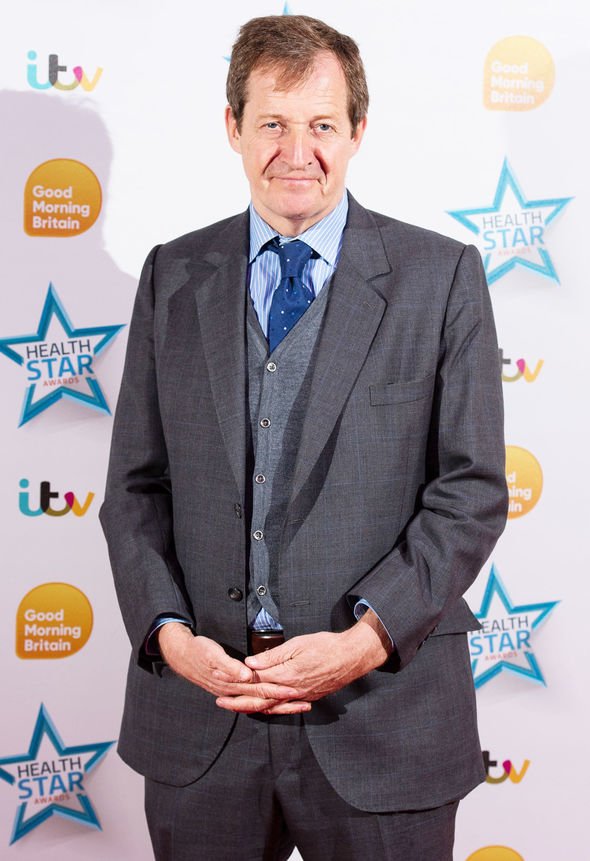 In the clip, the author replied: “Probably and I’d train hard for it and he’d lose.”

He was also quizzed on which of the political party leaders would win in a fight and it seemingly appeared his money was on SNP leader Nicola Sturgeon.

“[Boris] Johnson would just flail around, Jeremy [Corbyn] would say can we sit down and talk about it?,” Alastair explained.

“Farage would look good in the picture,” as he put his fists up in a boxing pose.

He finished: “I don’t think Jo Swinson would want to get into that. I think Nicola Sturgeon would be the best in a fight.”

It is not yet clear if the fight will be going ahead but the GMB host seemingly appeared keen to get in the ring with Alastair.

Meanwhile, Piers had some strong words for his BBC Breakfast rival Dan Walker on the ITV show today.

The TV anchor branded the BBC host as “Desperate Dan” as he told his co-star Susanna Reid their ITV show was “closing in” on the gap between them and their rivals.

Piers joked that he had celebrated the news by enjoying a “£41,000 bottle of wine.”

He added: “There will be plenty more where that came from when we overtake BBC Breakfast… it’ll happen.”

Good Morning Britain airs weekdays on ITV at 6.30am.