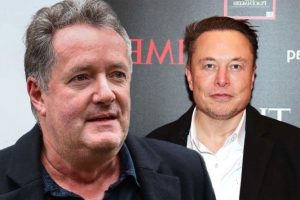 Journalist Piers Morgan, 56, had a lot to say about Elon Musk being announced as Time magazine’s Person of the Year for 2021. SpaceX and Tesla CEO Elon, 50, has been awarded the title in the same year that he saw his company’s market value rise to more than $1 trillion.

However, not everyone agreed with the business magnate receiving the honour.

Piers called out those who had criticised Time’s decision, describing Elon as “the single greatest entrepreneurial genius on Planet Earth right now”.

In response to the backlash, he wrote: “We need more people like him in the world, and less whiny woke wastrels currently throwing their toys out of their strollers because their bogeyman is finally getting the recognition that he deserves.”

Piers, who likened the inventor to himself, also called him “a swashbuckling maverick who’s turned himself into the world’s richest inhabitant through sheer force of visionary, innovative and risk-taking determination”.

The former Good Morning Britain presenter went on to point out in his latest MailOnline column that Elon’s vision had not been achieved by him being “Mr Nice. Guy”.

He spoke of previous complaints from Elon’s past co-workers, including reports of “wild firing rampages” and “confrontational meetings”, but insisted that it was all likely a symptom of him being a “truly transformative person”.

Piers was also careful to emphasise Time’s recognition that its award highlighted “the person who had the most influence on the events of the year, for good or for ill,” noting that he had “mistakenly” assumed Musk would be celebrated for all the good he has achieved.

“After all, this is a guy who’s spent the past 25 years trying to save the planet through sustainable cars, solar power, and ringing alarm bells about climate change and Artificial Intelligence, and who’s almost single-handedly restored the dream of space exploration including the stunning idea of colonizing Mars to help with Earth’s massive overpopulation crisis,” Piers wrote.

Elon is the founder and CEO of SpaceX and leads the brain-chip startup Neuralink and infrastructure firm The Boring Company.

In 2021, he watched his electric car company become the most valuable carmaker in the world and his rocket company fire an all-civilian crew to the edge of space.

However, Piers was shocked to find a large amount of backlash on social media in response to Elon Musk winning the accolade.

Addressing the outrage, he wrote: “I prefer to look at public figures in totality, believing them all to be imperfect, and the totality of Elon Musk’s achievements surely outweighs the bad stuff? Apparently, not.

“In fact, judging by the outraged liberal reaction to his Time POTY announcement, the woke brigade believe he is even less deserving than previous holders of the title like Adolf Hitler and Joseph Stalin.”

Taking to Twitter, Piers also shared his new column with his 7.9 million followers.

In the caption he wrote: “Whiny woke wastrels should stop their spiteful trashing of new @TIME Person of the Year @elonmusk – he’s a fearless entrepreneurial genius who’s doing more to save the world than all of them put together.”

Some Twitter users sided with Piers, with Carol Cooney writing: “Person of the year means made the most impact/were influential. It doesn’t mean good, bad or indifferent.”

“Probably the most sensible thing you have said in a while @piersmorgan,” commented dalej83.

However, many more appeared to challenge Piers, with Bart Odjas writing: “To save the world? How? And if you mean the electric cars then do some reading on what it takes to manufacture batteries and to dispose of them.”

“I’m not whiney or woke but rewarding obscene personal wealth is not a good look,” added David Livesey.

“By selling electric cars out of reach to the common man? If he was serious about saving the planet, his cars wouldn’t cost a bomb,” wrote WithNailLoki.

Time’s article naming Elon as their 2021 Person of the Year was published yesterday and is available online here.