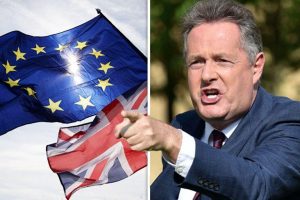 Piers Morgan says he’d rather have the Queen than Biden

Piers Morgan, 56, took to Twitter and addressed the state of the UK following the country’s departure from the European Union. The Uncensored presenter suggested the British public’s lives had been made more “difficult” since Brexit.

Brexit formally took effect two years ago, but the political and economic effects are still unfolding.

UK trade had shown signs of a strong recovery from the coronavirus shock by the end of 2020, but this fell back significantly in 2021.

Inflation – the rate at which prices rise – is currently at a 40-year high as the war in Ukraine and the pandemic push up the cost of everyday essentials.

Taking to Twitter today, Piers lamented over the prospects of Brexit but added he wants Britain to make progress.

In view of his 7.9 million followers, he penned: “At some stage, Brexit needs to start working – because so far, I see no evidence it is doing anything other than making British lives more difficult.

“I say this as someone who voted Remain but accepted the result & now wants to see Brexit work the way we were promised it would.”

@eftrbelvin wrote: “It would be far worse if you stayed in EU.”

@the_fool_of_oron remarked: “Our exports to the EU have just hit an all time high. What is not working, exactly?”

@South West Yid offered: “A sweeping statement without any acknowledgment of the difficulties of the last 2 years. Even if or when things get better the Remainers will never ever accept it anyway, get your head down and get on with it man!”

Others were less in agreement as they shared their thoughts on Brexit.

@squeak commented: “Well there is your first mistake. Thinking Brexit could work. We left our biggest trading partner, economic pain was always going to happen.”

@WilsonPerm suggested: “Never going to happen. Time to accept that it was a mistake.”

@sonnyjim wrote: “Brexit is fatally flawed and so many still refuse to acknowledge it.”

Britain has been independent of the European Union for the past two years but still faces daily challenges.

The UK voted to leave the EU by 52 percent to 48 percent in 2016 but Northern Ireland continues to follow Brussels’ rules on product standards.

There have been countless talks between Britain and the EU over Northern Ireland Protocol.

After two years of independence, debates over the efficacy of Brexit remain, and fears among Leavers are growing that the UK could seek to rejoin the bloc under a new Prime Minister.

It comes as the EU has announced new legal action against the UK government over its plans to scrap parts of the post-Brexit deal for Northern Ireland.