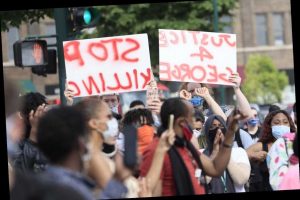 Derek Chauvin, the Minneapolis Police Officer who knelt on George Floyd’s neck before his death, has been the subject of numerous police conduct complaints, NBC News reports.

Chauvin joined the Minneapolis Police Academy in 2001 and has been the subject of at least 12 complaints, which cover use-of-force incidents as well as a lawsuit over the alleged violation of a prisoner’s constitutional rights.

Mylan Masson, a retired officer and training expert, called the 12 complaints against Chauvin over a two-decade period “a little bit higher than normal.” But she did note that anyone can file a complaint against an officer for any reason, and that officers that deal with the public frequently have more complaints (not that that means Chauvin’s record won’t warrant scrutiny in an investigation, Masson added).

According to records, Chauvin has been involved in multiple shootings over the course of his career. In 2006, he and five other officers responded to a stabbing that led to a chase with the alleged suspect, Wayne Reyes. Reyes allegedly got out of his truck at one point with a shotgun, at which point “several officers fired multiple shots,” killing Reyes.

Two years later, Chauvin shot and wounded a man named Ira Latrell Toles. That incident took place after Chauvin and his partner responded to a domestic disturbance. During the struggle, Toles allegedly reached for Chauvin’s weapon, at which point Chauvin fired two shots and hit Toles in the abdomen (Toles survived). After both the 2006 and 2008 incidents, Chauvin and the other officers involved were put on paid leave during the investigation, which is standard protocol.

Additionally, in 2006, Chuavin and seven others were named in a federal lawsuit filed by an inmate at the Minnesota Correctional Facility at Lino Lakes. It’s unclear what kind of allegations the lawsuit contained, and it was dismissed without prejudice in 2007.

According to Minneapolis’ Communities United Against Police Brutality database — which has been cited in various reports on Chauvin’s record — Chauvin has only received a handful of verbal reprimands for the complaints filed against him. Many of the complaints on the CUAPB database are listed as “closed” and not warranting discipline. No details about the nature of those complaints is available via the CUAPB.

Chauvin and the three other officers involved in the incident with Floyd were fired Tuesday from the Minneapolis Police Department. The FBI has launched a civil rights investigation and the Minnesota Bureau of Criminal Apprehension has also launched an investigation of its own. Chauvin has retained defense attorney Tom Kelly, who successfully defended Jeronimo Yanez, the police officer who was charged and acquitted of manslaughter in the 2016 death of Philando Castile. Kelly declined Rolling Stone‘s request for comment.