Pop Smoke’s ‘Shoot For The Stars, Aim For The Moon’ Tops Billboard 200 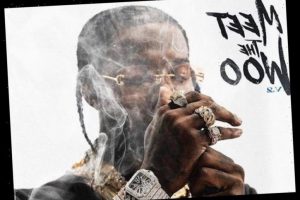 Pop Smoke currently rules the Billboard all-genre 200 chart, as his debut album Shoot for the Stars, Aim for the Moon bowed in the top spot.

Shoot for the Stars, Aim for the Moon earned the late rapper his first chart topper as the album earned 251,000 equivalent units in the week ending July 9, according to Nielsen Music/MRC Data.

Shoot for the Stars, Aim for the Moon, which dropped on July 3 via Victor Victor Worldwide/Republic Records, is the first posthumous No. 1 since XXXTentacion‘s Skins opened atop the chart in December 2018.

Pop Smoke, born Bashar Barakah Jackson, was killed in a home invasion on February 19. Five people were arrested on July 9 in connection with the murder.

Smoke released his first mixtape, Meet the Woo, in 2019 and also dropped a follow-up collection, Meet the Woo 2, earlier this year.