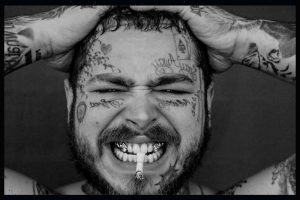 Post Malone has announced that his long-awaited studio album, Twelve Carat Toothache, will drop on June 3.

“Twelve Carat Toothache. June 3rd,” the rapper shared on social media along with a close-up picture of him showing his grin along with the “12 carats.”

Twelve Carat Toothache is a follow-up to 2019’s Hollywood’s Bleeding, which debuted at No. 1 on Billboard 200 albums chart. The year before, his Beerbongs & Bentleys album also debuted at No. 1.

Earlier this month, Posty’s co-manager Dre London indicated that the album, which will be his shortest album to date, would drop in May. However, Malone has pushed back the date to June.

“Results Or Excuses Choose Your Side!” London had then written on Instagram. “@postmalone album coming next month! What u want in life results or excuses!! #MondayMotivation.”