Pregnant Marnie Simpson reveals she’s has had to move out of family home: ‘it’s stressful’ 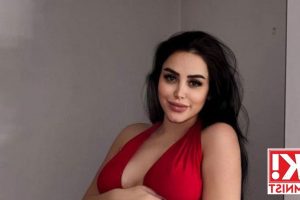 Now that Marnie Simpson and Casey Johnson have finally announced they are having another boy, the couple have so much to look forward to in the next few months as they prepare for the arrival of their second child in May.

In her new exclusive column – only available for OK! VIPs – Marnie, 30, has opened up about her cravings for sponges in her second pregnancy, which she experienced in her first pregnancy with Rox, now two. "Rox is always playing with sponges in the bath as well, which makes it worse because while we’re giving him his bath, I find myself daydreaming while looking at them! I’ll squeeze it in my fingers and let all the water come out," she reveals. Here, Marnie speaks about introducing the naughty step for her two year old son as she reveals she's been experiencing anxiety when watching the news about Ukraine… Sign up as a member to read the full column for FREE.

Are you an OK! VIP? If not, why not? It’s free and gives you backstage access to stories like this, exclusive home tours, special discounts and so much more! All you need to do is pop your email address below! P.s. if you’re already seeing this article in full, congrats – you’re already on our guest list! Rox has been driving me mad this week! Little boys are a pain, honestly. I’ve never known anything like it. He’s so active at the minute, he’s jumping everywhere. I keep looking at him and thinking, ‘Where has this energy come from?’ He even clawed my face because he couldn’t get his own way.

He’s just going through a mad stage, I think. I’ve now introduced the naughty step, so hopefully, we will see a difference! Me and Casey are really soft, so we’re trying hard to discipline him.

I am 29 weeks now, so next week I will be 30 weeks. I can’t believe it. It’s really catching up with me now. It’s really starting to feel real. I had some blood tests taken this week with the midwife to check my levels are alright.

When I was there, there was a woman and she was holding her five-day-old baby boy. It made me so excited about doing it all over again with Casey. We have so much to look forward to in the months ahead.

Pass me the sponge!

When I was pregnant with Rox, I had cravings for sponges and I’ve been craving them so much this week. I thought I had gotten away with it for this pregnancy, but oh boy was I wrong. I can’t explain how much this craving takes over me. It’s so frustrating.

Rox is always playing with sponges in the bath as well, which makes it worse because while we’re giving him his bath, I find myself daydreaming while looking at them! I’ll squeeze it in my fingers and let all the water come out.

It’s so satisfying, ha. I literally had 600 messages in my DMs from women saying they had experienced the exact same feeling. It’s so popular!

I’ve also been getting the house sorted. We’re getting a new kitchen fitted on Monday, so we’re moving into an Air BnB for three weeks! It’s so stressful. We’re going to pack up all of our kitchen stuff and pack our bags to move out.

Obviously, the Real Dirty Dancing has been on TV at the moment, and I keep getting so many messages about it. I’ve been too embarrassed to watch it when I know everyone else is.

I did build so much confidence while filming the show, but then, when you watch yourself back, it’s a completely different story. I am actually a really shy person unless I’ve had a few drinks.

I think that’s why I feel fine watching Geordie Shore back because I was drunk the whole time. They’re not going to show all the sober moments, are they? It was fuelled by alcohol.

But on the Real Dirty Dancing, you’re seeing the real me, the shy side of me! I absolutely loved filming it, everyone involved was amazing to work with and we all had such a good time together.

I stand with Ukraine

Being a mother of two boys (nearly!), it’s been so heartbreaking watching everything going on in Ukraine. When I’ve been going to bed after watching the news, I’ve experienced really bad anxiety while thinking about what’s going on in the world.

It’s so frightening. I just feel like it’s been one thing after the other. It was Covid-19, and now it’s this. It’s terribly sad that children out there are going through this. I almost feel guilty that we’re just going to bed and we’re safe and sound. I just want it to end.