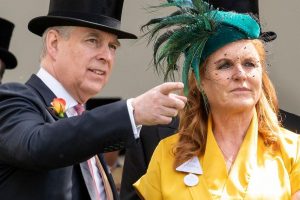 A racecourse event is being renamed in the wake of news that Prince Andrew will face a civil trial over sexual assault allegations.

Despite his legal team's attempts to have the case dismissed, the Duke of York is set to face a civil trial in relation to claims he sexually abused Virginia Giuffre when she was aged 17. Andrew has always vehemently denied the accusation.

The increased scrutiny Andrew is facing has lead to the Duke of York Stakes event, which takes place at York Racecourse, being rebranded.

The six-furlong sprint match was actually named in honour of the Queen’s grandfather, George V, however as Prince Andrew is the current Duke of York, there is an unintentional connection.

“It was named in honour of Prince George who went on to become King George V. It has never been directly about Prince Andrew,” James Brennan, head of marketing at York Racecourse, explained to the Express.

“We are going to explore how we can make the name a lot clearer about its history – and that the name refers to an entirely different Duke of York.”

James concluded that making a clear break from Prince Andrew would be the “appropriate step” for the event.

The marketing head also pointed out that discussions involving external racing bodies outside of York Racecourse will take place before a final decision on the new name is made.

This news comes after Buckingham Palace released a statement saying that the Queen had stripped Prince Andrew of his military titles and patronages, meaning he will be on trial as a “private citizen.”

“With the Queen's approval and agreement, The Duke of York's military affiliations and Royal patronages have been returned to the Queen,” the statement read.

"The Duke of York will continue not to undertake any public duties and is defending this case as a private citizen.”

Following the news of the York Racecourse event changing its name, Australian commentator Daniela Elser predicts that the Duke of York title might become extinct altogether.

“I think we can confidently say the current Duke of York will also be the last,” she wrote for News.co.au.

For all the latest on the Royal family, sign up to our brand new weekly Royal Newsletter.