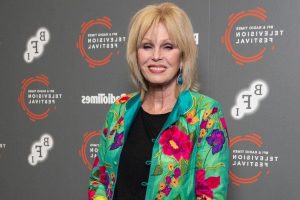 Joanna Lumley has slammed Netflix's hit show The Crown as she branded it "rubbish".

The 75 year old, who is most well known for playing the role of Patsy Stone in Absolutely Fabulous, shared her pity for the cast of the programme and said she doesn't believe the Royal Family "ever watch it".

The Crown is coming out with a fifth series, which stars the likes of Richard Cordery, 71, who will play Marmaduke Hussey – then chairman of the BBC's board of governors – and Elizabeth Debicki, 31, as Princess Diana.

Actress Joanna, who is a close friend of Prince Charles, 73, and attended his wedding to Camilla, Duchess of Cornwall, 74, said: "I don’t think they [the Royal Family] watch it and I never watch it.

"I know them, so I know it’s all made up and it’s rubbish. All the poor actors who are doing their best to copy them, it’s awful."

Joanna continued: "Imagine somebody making up conversations they think you’ve had.

"It’s so laughable. They’ve used real people, whom they’ve copied, and then made up all the conversations. It’s insane."

Netflix released a statement explaining that the show is a "work of fiction" after receiving backlash over scenes aired around Princess Diana, played by Emma Corrin, 25, and Prince Charles, played by Josh O'Connor, 31, last year.

"We have every confidence our members understand that it’s a work of fiction broadly based on historical events," they shared.

Joanna isn't the only one shunning the series though as Prince William is reportedly frustrated with the BBC for cooperating with the streaming giant to film scenes depicting the aftermath of his late mum's 1995 Panorama interview with Martin Bashir.

The broadcasting giant confirmed to The Telegraph that they allowed the show to film scenes portraying events that followed the infamous interview outside their New Broadcasting House in London.

The publication reported that William, 39, who was recently reportedly told he and the Royal Family can sue Netflix over The Crown, is deeply frustrated by the BBC helping Netflix with the show as they "continue to make money" from it.

A source also told The Sun: “It’s unbelievable that in the middle of a major fight with William and the Royal Family over its documentary, the BBC would allow Netflix to film on their property.

“The BBC and Netflix are joining forces to do the one thing William doesn’t want – dramatising the Panorama interview which is a part of his life he has said he does not wish to revisit.”

Stay up to date with all the latest on The Crown by signing up to OK!'s daily celebrity newsletter.