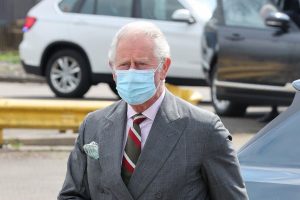 Prince Charles carried out a royal engagement in Wales today, one day after his son Prince Harry spoke out in another revealing interview.

The Prince of Wales, 72, visited BCB International Cardiff which is a supplier of protective, medical and defence equipment.

His Royal Highness will tour the factory and view their full production processes. During the visit he will see Polar survival kits being packed and camouflage nets being cut.

Charles wore a grey suit teamed with a light pink shirt and a striped brown and red tie, while he also wore a protective blue face mask.

Charles is due to carry out three engagements in Wales today.

It comes just one day after his son Prince Harry’s interview on Dax Shepherd's Armchair Expert podcast to promote his Apple TV+ series with Oprah Winfrey, called The Me You Can't See, was released.

In it, Harry spoke about many things, including why he left the Royal Family and moved to the US with wife Meghan Markle and their son Archie to start fresh.

The Duke of Sussex explained that he uprooted his life halfway across the world to "break the cycle" of "pain and suffering" that's been passed down in his family.

The 36 year old, who is expecting his second child, a baby girl, with Meghan, was asked if he would raise his two kids in the "opposite direction" of how his own father Prince Charles brought him up during the intimate chat.

"Isn't life about breaking the cycle?" he responded before insisting there's no need to "blame anyone" but he himself has "experienced some form of pain or suffering because of the pain or suffering that perhaps my father or my parents had suffered."

Prince Harry vowed to "break that cycle so that I don't pass it on, basically."

Expanding on this, Harry continued: "It's a lot of genetic pain and suffering that gets passed on anyway so we as parents should be doing the most we can to try and say, 'You know what, that happened to me, I'm going to make sure that doesn't happen to you'."

Speaking on his own upbringing, he went on to explain how he "never saw it" or "knew about it" and then he began to figure out where his father went to school, what happened to him, all the experiences he went through personally and how it's "connected to his parents," the Queen and the late Prince Philip.

"So he was treating me the way he was treated, which means how can I change that for my own kids? Well here I am, I've now moved my whole family to the US – that wasn't the plan!" he added.