Today’s the first day of school (and work) for some people following the holidays, but Prince William and Kate Middleton’s children aren’t included in that population…and no, it’s not because they’re getting special royal treatment. Prince George and Princess Charlotte will be hanging out at the palace for a little while longer because their school—Thomas’s Battersea—is staying closed longer than anticipated.

Over the weekend, U.K. government officials confirmed that all primary schools in London (where Thomas’s Battersea is located) will remain closed because of increased coronavirus cases in the city, meaning that George’s return to Year 3 and Charlotte’s return to Year 1 will have to wait.

Hello! reported that this government decision also affects their baby brother, Prince Louis, who was set to begin preschool this week on January 6. The outlet explained that Louis was supposed to follow in the footsteps of Charlotte by attending The Willcocks Nursery School in London. As a result, Will and Kate have to hold off on enrolling him, but that’s totally fine because they have homeschooling experience! 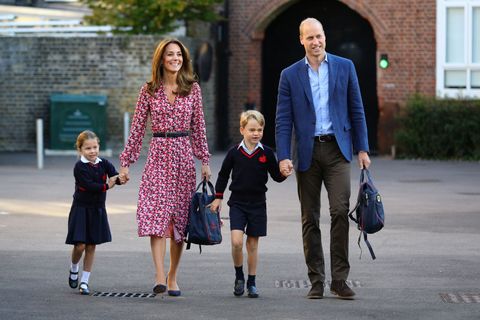 Back in April, Kate admitted she kept the children on a strict schedule as they learned at home. “Someone gave me some very good advice, pre the [Easter] holidays, to fit some structure to keep to a pretty strict routine. Don’t tell the children, we’ve actually kept it going through the holidays. I felt very mean,” she said in an interview with BBC. As for the homeschooling, Kate said “It’s great—there’s so many great tips online and fun activities that you can do with the children, so it hasn’t been all hardcore.”

William, on the other hand, views the homeschooling a bit differently. “Homeschooling is fun, isn’t it?” William said on the call during the documentary Football, Prince William and Our Mental Health in May. “You start worrying how little you actually know from your school days when you literally can’t do the maths questions at home!” Relatable!

Best of luck to the royal tots on their academic endeavors!