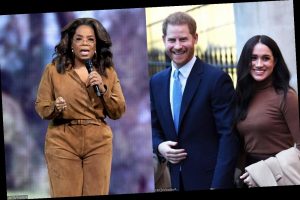 It is said that the wide-ranging interview, which is set to air on Sunday, will cover everything about the Duke and Duchess of Sussex, including them stepping into life as British royals last year.

AceShowbiz -Prince Harry and wife Meghan Markle are set to have an “intimate” interview with Oprah Winfrey for a 90-minute primetime special that will air on CBS on Sunday, March 7. While it is exciting for fans of the Duke and Duchess of Sussex, it has been reported that the couple will potentially lose all of their royal privileges ahead of the tell-all sit-down.

According to HollywoodUnlocked, the prince is more than likely to be stripped of his three remaining honorary military titles, his patronages with the Rugby Football Union, Rugby Football League and the London Marathon. Additionally, he may lose any other links with the Royal Family organizations.

As for Meghan, the former “Suits” actress may also have to step down as patron of the National Theatre. It’s a role that the mom of one was handed in 2019 as a major gesture of support and affection from the organization and the Queen. Further making it worse, the new report also claims that Meghan and Harry most likely need to give up their links with the Commonwealth.

Of the interview, CBS revealed in a statement, “Winfrey will speak with Meghan, The Duchess of Sussex, in a wide-ranging interview, covering everything from stepping into life as a Royal, marriage, motherhood, philanthropic work to how she is handling life under intense public pressure.”

“Later, the two are joined by Prince Harry as they speak about their move to the United States and their future hopes and dreams for their expanding family,” the statement continued.

The couple is indeed close with the popular TV personality. Oprah was among the guests at their May 2018 wedding at Windsor Castle. Additionally, the TV mogul is one of the couple’s neighbors after they moved into their Montecito, California house last summer.