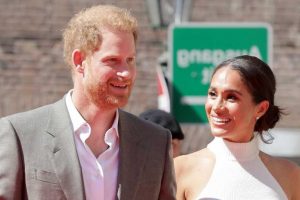 There’s good news and bad news on the royal feud front. The good news: Prince Harry and Meghan Markle have reportedly been planning to work through their issues with the rest of the royal family. The bad news: Those plans might be changing in the wake of the Queen’s death.

“Next year 2023 was to be their reconciliation year,” a royal source told The Sun of the Sussexes’ plan for putting their royal feud to rest. According to The Sun, however, if Harry’s upcoming memoir and/or the couple’s Netflix docuseries include anything too critical of now-King Charles or his wife, Camilla, those plans could be tough to pull off.

“They have always been careful to not criticize the monarch. They have always tried to be respectful to the Queen,” a source told the paper. “But the Queen has now died and Charles and Camilla are the King and Queen. Clearly, this reconciliation attempt would never work if they have been critical of the new monarch, or both.”

Harry and Meghan’s plan, according to the Sun report, was to close out an “era of visibility” in 2022 (when their Netflix series and Harry’s memoir were both originally planned to be released) and then shift gears in 2023. Royal author Robert Jobson called the timing of the rumored reconciliation plan “appalling” and suggested that the royal feud may be unfixable at this point.

“It is also completely arrogant because they are assuming they can win back the trust of Harry’s father and brother. But that trust has gone forever. Harry and Meghan will never be looked at the same,” Jobson explained. “Harry needs to remember he is now dealing with the Head of State — not just his dad. If they disrespect the King, they are not only disrespecting the man, but also the institution.”