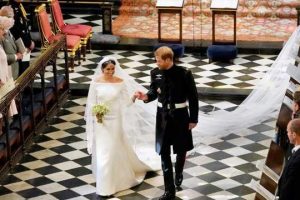 It may have been two whole years since Prince Harry and Meghan Markle‘s royal wedding, but we’re still every bit obsessed with the details, much like the rest of the world. Discover what their wedding suppliers and staff had to say about what it was really like behind-the-scenes…

The Duke and Duchess of Sussex’s wedding, which was attended by many senior royals and watched by millions around the world, had an army of employees and entertainers making their day so special. Discover what Idris Elba, Elton John and more have said about the experience.

Idris Elba admitted to being stressed about the gig

On a recent episode of The Tonight Show Starring Jimmy Fallon, Idris Elba opened up about his experience of DJing at the royal wedding in 2018. “They’re good friends and I wanted to make sure they had a good time, so there was a lot of pressure.”

It was the “most stressful” gig he’s done. He explained: “This wasn’t like my cousin’s wedding. This was like, you know, this wasn’t at the community hall, the reception. This was a big deal.”

Elton ended up performing for the couple

Elton John provided entertainment at the royal couple’s wedding reception with an impromptu sing-along, and he acknowledged the momentous occasion in a CNN interview.

The hitmaker said: “It was very, very wonderful to be there. To have a black gospel choir, a multiracial bride, a black cellist, who was wonderful, a preacher —it felt like a party, and it felt like progress had been made. Thank god, thank god.”

Elton’s husband, David Furnish also had a lovely time at the wedding: “What was so inspiring, and it sounds corny, but, true love is what really shone through and that’s what everybody felt, the sincerity and the integrity of that true love on the day.”

LOOK: 14 of the most romantic royal wedding kisses through the years

The royal wedding cake was hand-crafted by Claire

Royal cakemaker Claire Ptak had the high-pressured job of creating a jaw-dropping wedding cake to be enjoyed by 600 very high-profile wedding guests.

Speaking to Vanity Fair, Claire opened up about her royal wedding “nightmares”. “I needed to be sure the icing was going to stand up to the atmosphere it was in,” she said. “I knew the fresh buttercream was going to be hard to keep looking stable in a warm room with 600 people. It’s so soft and so fresh that it was the most stressful part of [making] the cake. I had nightmares about it sliding off the table.”

Karen headed up the choir which preformed at the church

The Kingdom Choir conductor Karen Gibson was part of the iconic performance at St George’s Chapel, and she spoke to Notebook magazine about the rehearsals ahead of the big day.

“Harry and Meghan knew what they wanted, we needed to get it perfect. After the sixth version they suggested we had a meeting, so I took a few members of the choice to Kensington Palace. When they walked in, it was surreal. But they were lovely, smiley, warm, welcoming and very much in love.”

And, as we know, the performance was perfection in the end!