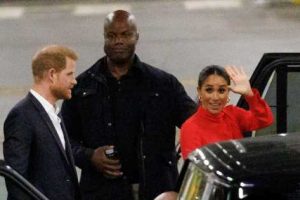 Prince HarryandMeghan Markle, the Duke and Duchess of Sussex, are reported to have been protected during their visit to the UK by a bodyguard who has previously been convicted of domestic abuse.

The Sussexes hired their own security fortheir unofficial European tour, which they had embarked on just days before the death of the lateQueen Elizabeth II.

During their time in the UK, the couple were photographed alongside bodyguard and former police officer Pere Daobry.

Daobry worked as a Firearms Officer for the Metropolitan Police, before he was convicted of assaulting his then-wife, police sergeant Sarah Jay.

The attack occurred in 2015, when he attempted to strangle Sarah, after she suggested he go to the gym to calm down following a row.

He then choked her until she fell unconscious leaving her just seconds away from death, before calling 999 and telling the emergency responder: “I want to report an assault and I am the perpetrator. I have assaulted my wife.”

When asked by the operator if his wife needed an ambulance, the dad-of-four said: “Yeah, I tried to strangle her.”

Daobry was convicted for the assault in 2016, but was spared jail time after magistrates said he had the “decency” to turn himself in.

Sarah slapped the soft sentence her ex-husband received, withThe Sunreporting her as saying: “I suffered at the hands of this lunatic for two years. I am devastated he isn't behind bars. He deserves to be.

“For any man to do this is terrible – for a policeman to do what he did is outrageous. He nearly killed me. All he got is a slap on the wrists. What deterrent is that for other men?”

Since his conviction Daobry is believed to have worked as protection for VIPs, including a member of the UAE Royal Family.

He is now said to be working for a private security firm. Going through a private firms means it's likely that Harry and Meghan didn't directly hire Daobry.

The Telegraphreports that Pere Daobry’s father has confirmed that his son is indeed the man who was photographed with Meghan and Harry.

Meghan has previously shown support for a number of feminist causes, most recentlylaunching her podcast Archetypes, in which she discusses how society’s labels have historically held women back.

The description for Archetypes on Spotify is as follows: “Introducing Archetypes, a refreshing and dynamic new podcast where Meghan, The Duchess of Sussex dives into the labels that try to hold women back.

“During these intimate and candid conversations with guests from around the world we discover how these archetypes impact our everyday lives in ways big and small.

“With experts and historians, Meghan also uncovers how we got here in the first place – unearthing the origin of words such as ‘diva’, ‘sl*t’, ‘the B word’, ‘hysterical’, and many more, and asks the question: can we change this?”

OK! have reached out to representatives for the Duke and Duchess of Sussex for comment.