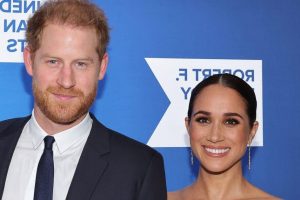 The Duke of Sussex has been praised by fans after he was seen protecting his wife Meghan Markle as they arrived at an event together.

The Sussexes arrived outside the Midtown Hilton in a black SUV, with doting husband Harry emerging from the vehicle first in order to help his wife exit the car. He could be seen making sure his umbrella was placed over Meghan to ensure she didn't get caught in the rain.

Meghan held Harry's hand as she stepped out of the vehicle and the pair then made their way into the venue ready to accept the Ripple of Hope Award together.

Fans were quick to point out the sweet moment and many flocked to praise Harry for protecting his wife from the rain and helping her.

"No one is Meghan’s best security guard than her own loving husband," one fan wrote online, as another said: “Protecting the hair and outfit like an awesome husband."

"Beautiful!!! Harry is so unbelievably kind and sweet," a third person wrote on social media.

Meghan and Harry appeared to laugh off the criticism they've recently received due to their documentary series, which is set to debut on Friday, as they enjoyed their evening out in NYC.

The pair went on to stage at one point, where Harry spoke of the importance of story-telling as they accepted the Ripple of Hope Award at the gala. “Our hope with this award is to inspire a new generation of leadership in the arts, where diverse up and coming talent have a platform to have their voices heard and their stories told,” the couple said in a statement.

“The values of RFK Foundation and The Archewell Foundation are aligned in our shared belief of courage over fear, and love over hate. Together we know that a ripple of hope can turn into a wave of change.”