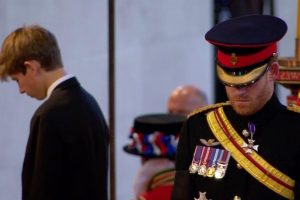 Prince Harry and Prince William once again put aside their differences on Saturday evening as the brothers stood united in grief as they performed a vigil at The Queen 's coffin, where the late monarch is lying-in-state in Westminster Hall.

Both immaculately dressed in their military uniforms, the senior royals were joined by their cousins Zara Tindall and Peter Philips, Princesses Beatrice and Eugenie, along with Lady Louise Windsor and her brother Viscount Severn.

The eight royals, who are all the Queen’s grandchildren, stood together in a ceremonial honour guard just hours after their parents held an emotional vigil in the Palace of Westminster. In a surprising change of policy, Prince Harry was permitted to wear his military uniform for the ceremony, just days after previously being denied the opportunity as he was no longer a working royal.

Harry, who saw action on the front line during two tours of duty in Afghanistan, had been denied the chance to wear his military uniform as he publicly mourns.

But royal sources say the King had decided his youngest son could wear uniform for the vigil, saying he would stand at the foot of the coffin, with William at the head.

Despite being a former Army officer, Harry has been in civilian dress for all official events so far, including walking behind his grandmother’s coffin on Wednesday when it was carried to Westminster Hall for lying in state. Saturday’s vigil echoed one held by the Queen’s children on Friday evening, when King Charles, the Duke of York, the Princess Royal and the Earl of Wessex – all took part in their own.

The King, Anne, Andrew and Edward had solemn looks on their faces as they stood vigil around their mother’s coffin, with their heads bowed throughout as members of the public filed slowly past them.

It comes as final preparations are under way for the funeral on Monday, with politicians and royal dignitaries from around the world expected to arrive throughout the weekend. Earlier on Saturday, Prime Minster Liz Truss met with the Prime Ministers of Australia and New Zealand – Anthony Albanese and Jacinda Ardern – at the Government’s Chevening country residence, a No 10 spokesperson said.

Charles also met with the chiefs of staff at Buckingham Palace on Saturday and personally visited Police headquarters in London to thank the emergency services for their work in planning the funeral, which many news sources believe may be the largest international event of it’s kind ever held in the UK.

The new King and his son, Prince William also surprised crowds that were queuing to see the late Queen on Saturday, as they stopped to personally greet and thank as many members of the public as time would allow, as the queue stretched along the side of the Thames. Similar scenes also unfolded outside Buckingham Palace as Prince Edward and Sophie, Countess of Wessex also stopped to thank the public for their outpouring of love in the wake of the Queen’s death.

Meanwhile, thousands of people continue to queue to see the Queen’s coffin lying in state, with some facing more than a day in line.

Early on Saturday morning, the Department for Digital, Culture, Media & Sport’s queue tracker warned people not to travel to join the back of the queue, but it changed the guidance at 8am saying the line had reached Southwark Park with wait times “at least 24 hours”.

Those inside Westminster Hall were briefly shocked on Friday night when a man was arrested after moving out of the queue to approach the Queen’s coffin. Two thousand people will gather inside Westminster Abbey in London on Monday for the Queen’s funeral.

Some 800 people, including members of the Queen’s Household and Windsor estate staff, will attend the committal service afterwards at 4pm in St George’s Chapel, Windsor Castle.

After the funeral, the King and members of the royal family will walk behind the Queen’s coffin to Wellington Arch when it leaves Westminster Abbey, before it is driven to Windsor on the state hearse.