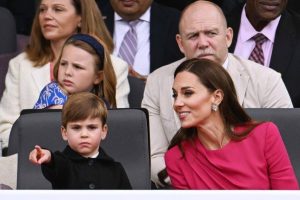 Kate Middleton has revealed that her son Prince Louis is struggling to understand his great-grandmother the Queen's death.

David Hurley explained that the Princess told him how her children were taking their great-grandmother's death.

While Prince George is "sort of now realising how important his great-grandmother was and what is going on", Prince Louis doesn't completely understand.

Hurley said: "The younger one is now asking questions like, 'do you think we can still play these games when we go to Balmoral' and things like that, because she's not going to be there?"

It's been confirmed Prince George and Princess Charlotte will be attending the Queen's funeral today, Monday 19 September, and will walk with other family members in the procession.

A source told MailOnline: "As parents they have, of course, thought long and hard about whether their children should accompany them.

"Of course little Louis is too young, but they think George and Charlotte are up to it."

According to the order of service, King Charles and the Queen Consort will walk immediately behind the coffin, then Princess Anne and Vice Admiral Sir Tim Laurence, followed by Prince Andrew.

Prince Edward and Sophie, the Countess of Wessex will then walk behind, and Prince William and Kate Middleton will follow them.

Princess Charlotte and Prince George will be positioned behind their parents, while Prince Harry and Meghan Markle will walk behind them.

The Queen passed away on Thursday 8 September at the age of 96 at Balmoral in Scotland.

Earlier on in the day, Buckingham Palace had announced that doctors were concerned about her health and were monitoring her.

However in the evening, a statement from the Palace read: "The Queen died peacefully at Balmoral this afternoon. The King and The Queen Consort will remain at Balmoral this evening and will return to London tomorrow."

King Charles said: ""We mourn profoundly the passing of a cherished sovereign and a much-loved mother.

"I know her loss will be deeply felt throughout the country, the realms and the Commonwealth, and by countless people around the world."