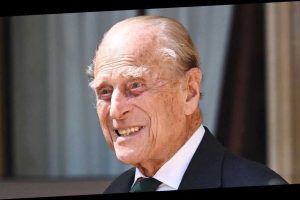 Returning to duty. Prince Philip stepped out of retirement for a rare public appearance to pass over the role of Colonel-in-Chief of the Rifles to Duchess Camilla.

The Duke of Edinburgh, 99, attended the ceremony at Windsor Castle on Wednesday, July 22, while the Duchess of Cornwall, 73, participated in a separate ceremony at Highgrove House in Gloucestershire, England. Assistant Colonel Commandant Major General Tom Copinger-Symes thanked Philip for his 67 years of support in the Rifles. Meanwhile, the Rifles’ Colonel Commandant General Sir Patrick Sanders welcomed Prince Charles‘ wife as the new Colonel-in-Chief.

Days earlier, the duke attended Princess Beatrice and Edoardo Mapelli Mozzi‘s wedding ceremony with Queen Elizabeth II on July 17. Prior to Beatrice’s ceremony, Philip was last seen at a big event in May 2019 when he attended Lady Gabriella Windsor’s wedding.

The duke retired from public duties in 2017 after 65 years of service. Philip has remained mostly out of the spotlight but the queen, 94, released a new photo of the couple in celebration of his birthday in June.

Two months earlier, Philip shared a rare public message in honor of World Immunization Week and thanked workers across the U.K. for helping during the coronavirus pandemic.

“I wanted to recognize the vital and urgent work being done by so many to tackle the pandemic; by those in the medical and scientific professions, at universities and research institutions, all united in working to protect us from Covid-19,” he wrote in a statement in April.

He added, “On behalf of those of us who remain safe and at home, I also wanted to thank all key workers who ensure the infrastructure of our life continues; the staff and volunteers working in food production and distribution, those keeping postal and delivery services going, and those ensuring the rubbish continues to be collected.”

Scroll down to see pictures of Philip at the Rifles’ ceremony.