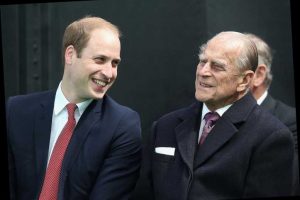 Prince William will no longer be participating in this weekend's British Academy Film and Television Arts Awards.

William, who has been President of the BAFTAs since 2010, has withdrawn from the event this year due to the death of his grandfather Prince Philip.

"In light of The Duke of Edinburgh's passing, The Duke of Cambridge will no longer be part of BAFTA programming this weekend," the BAFTAs said in a statement obtained by PEOPLE. "Our thoughts are with the Royal Family, to whom we offer our deepest sympathy at this time."

His office at Kensington Palace also confirms the news to PEOPLE.

William was due to be included in a pre-recorded interview on Saturday about filming during the COVID lockdown and was also set to deliver a virtual speech on Sunday.

The Duke of Edinburgh, 99, was the first President of the BAFTAs. The Duke of Edinburgh "passed away peacefully" at Windsor Castle on Friday, where he and the monarch, 94, have spent the majority of the past year amid the COVID-19 pandemic.

His death came just weeks after he returned to Windsor Castle following a month-long hospital stay that included treatment for an infection and a successful procedure for a pre-existing heart condition.

Listen below to the episode of our daily podcast PEOPLE Every Day where we are looking back at Prince Philip's life and legacy.

On Saturday morning, the official Twitter account for Queen Elizabeth and her family members also shared a quote the monarch once said about her loving husband.

"He has, quite simply, been my strength and stay all these years, and I, and his whole family, and this and many other countries, owe him a debt greater than he would ever claim, or we shall ever know," she said about Philip in 1997.

Watch Elizabeth & Philip: A Royal Romance – The True Story Behind the Crown on PeopleTV.com or on the PeopleTV app. The Duke of Edinburgh "passed away peacefully" at Windsor Castle on Friday, where he and the monarch have spent the majority of the past year amid the COVID-19 pandemic.

His death came just weeks after he returned to Windsor Castle following a month-long hospital stay that included treatment for an infection and a successful procedure for a pre-existing heart condition.

Following his death, the royal family showed their respect by changing their social media icons.

William and his wife Kate Middleton swapped out the smiling photo with their three children from last year, when they all participated in the "Clap for Carers" campaign near the start of the coronavirus pandemic outside their Amner Hall country home.

In its place is their joint monogram. They also changed their cover photo on Twitter to a black-and-white photo of the Duke of Edinburgh.

Can't get enough of PEOPLE's Royals coverage? Sign up for our free Royals newsletter to get the latest updates on Kate Middleton, Meghan Markle and more Funeral plans for the Duke of Edinburgh have been set in motion as the Queen enters an eight-day period of mourning.

The monarch will refrain from carrying out any royal duties during this time. Affairs of state will also be put on pause.

In a statement, the palace said Friday, "During the coronavirus pandemic, and in light of current government advice and social distancing guidelines, modified funeral and ceremonial arrangements for His Royal Highness The Duke of Edinburgh are being considered by Her Majesty The Queen. Details will be confirmed in due course."